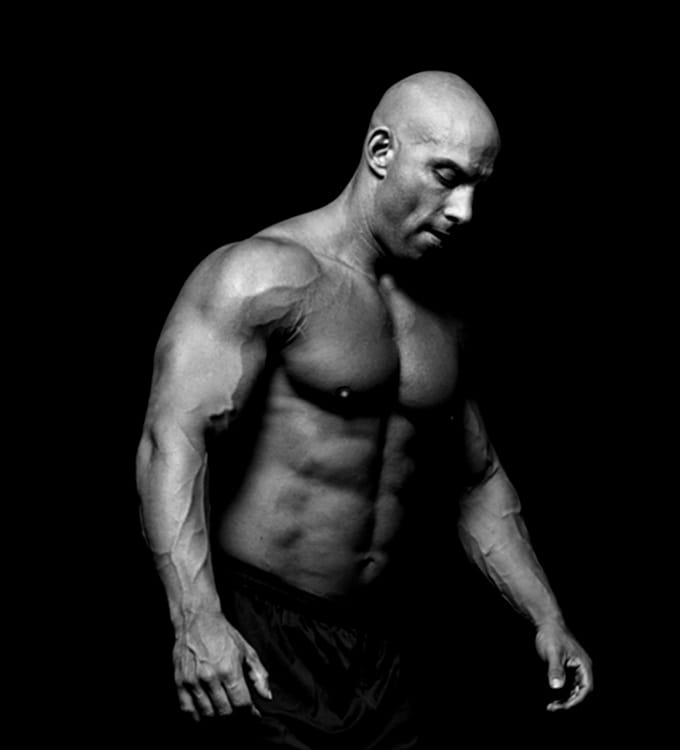 Every time you start a new type of diet, self-doubt can be your worst enemy, especially when you are working the kinks out. You’d think that it doesn’t happen to us “experts” but if anything, it’s worse. Knowledge can be a double-edged sword. You can easily convince yourself to change things and overanalyze everything.

It happened to be the very first week… Check the second day of my keto experiment!

I did however put myself in the worst situation possible. It’s not an excuse, but it explains a lot. Let me tell you what I mean.

I just did a photoshoot a few weeks back. Got into great condition; extremely vascular and thin-skinned. In that state, any pound you gain messes up your look, even if it’s water. You still look awesome, but you saw yourself peeled for a few weeks so anything less than that you perceive as fat (yes, bodybuilding is a very healthy activity).

After my photoshoot, my goal was to maintain about 95% of my condition while improving my strength and some weak areas. I know how I am: all or nothing! That’s why I can easily get into good shape when I have a goal, but also get sloppy as soon as that goal is achieved. I either eat 100% clean or mostly crap!

So, knowing this about myself I decided to stick to my diet 5 days per week, have an all-out cheat day per week, and one higher (clean) carb day. All or nothing days.

It worked for the four weeks I was at home. But I didn’t count on my travels. I have the natural tendency to eat like shit when I’m on the road for seminars. Likely because of the stress, but due to boredom and being away from my wife. So, I basically start to eat a lot more for pleasure in search of that dopamine rush.

This was all made worse by the fact that I was already having one cheat day per week, which increased my cravings for junk (when I don’t cheat, I don’t feel like cheating).

I was actually pretty good during the first week of my trip, but all hell broke loose the second week. As I mentioned in the first installment of this series, I gained about 10lbs. Now, a lot of it was water retention (inflammation from eating crap and from the flight). So, I looked really bad the first day I came back. I even reached a morning weight of 211 (my normal being 200-201).

After the first day of my keto experiment, I was down to 206. But here’s the thing: I still held enough water to look bad but I also felt small. In other words, emotionally I felt like a train wreck (heck, I wanted to cry!).  In turn, feeling and looking like crap made me want to eat comfort food, which for me is donuts, pastries, ice cream, etc.  In fact, I wanted to eat it so bad that I started to convince myself that keto diets were not appropriate for me and were just a fad. I almost gave up… but stuck with it and decided to give it a few more days.  Lucky for me the next day I woke up at 201 and looking pretty much as lean as before my trip. Not as tight, but looking good enough to get my good mood back.

The message here is that we all have doubts and moments where we feel (and look) like shit when dieting. These are the moments where you are at risk of convincing yourself to eat foods you shouldn’t.  Stick with it, tough it out, trust me.

What Am I Doing?

A lot of people asked me what my macros are and what kind of training I’m doing.

Let’s start with training. Based on my new Neurotyping System, I am a type 2A neurotype (more on this in upcoming videos, articles, and more!), so I need variety. I’m also sick and tired of the bodybuilding training I used to get in shape for my photoshoot! Type 2As need both neural and muscular work at each session to stay motivated and they need a lot of variation, mostly in the form of training methods.

My current program is a conjugated bodybuilding program heavily influenced by the work of Louie Simmons (BTW, I have a conjugated program that will be available soon on my website), with some slight differences:

3 weeks of back squat

It really is perfect for a type 2A because every workout is different. All the main workouts include neural and muscular work and there is variation every week.

But my weight drop was too fast (yes, I lost a lot of water, but still), so I will likely increase the fats to bump everything up to around 2500 calories. As I mentioned, on day one I was 211, day two 206, day three 201, and day four 195! When prepping for my photoshoot, I got down to 192-193 when I was truly depleted and post photoshoot I got down to 195-196, depleted. This tells me that the current caloric intake I selected, depletes me too much, which is not my objective.

YES, my adjusted caloric intake is still low. But understand that at the end of my photoshoot prep, I was ingesting around 2000 calories, some days less. So, I need to gradually build my intake back up. I also understand that I’m not losing muscle if I’m depleted and flat for a few days. I prefer to have a caloric intake that is too low and adjust it up then go too high, gain some fat, then have to adjust it down and try to lose the fat.

Now for some lessons!

So Far So Good? Not Really…

I will be honest, my first week was underwhelming. After two days, I felt flat as hell. After three days, my workout motivation tanked, and I half-assed a few workouts for the first time in months. I also felt drained and had big mood swings.

Keto advocates will say that you need to be keto-adapted to start to feel good and that performance increases the longer you stick with the plan. I believe that 100%. But honestly, I did not expect this to suck this bad. After all, I just did about 8 weeks of low carbs, low fat, high protein, and my motivation wasn’t affected until the last 2 weeks.

I will give it more time, especially since I likely started with my calories too low.

By the way,, for those who will say that I’m feeling flat because of lack of hydration and electrolytes; I agree that I lost a lot of water weight (heck I went from 211 down to 195) but about 10 of those pounds were my “normal” water retention from flying (I always gain 6-8lbs of water when I fly more than 8 hours). So, in reality, I only lost 6lbs over my “normal” weight. Even when I dieted down for my shoot I didn’t feel like crap or look flat when I was depleted at 193lbs. I’m also adding more salt, potassium and magnesium, so lack of electrolytes is not the problem.

Anyway, let’s see if time and increased calories will help.

Two More Reasons Why People Fail On A Keto Diet

Regardless of the approach, you are using, I believe that when someone starts a keto approach, they should use the straight keto diet until they are keto-adapted (can take anywhere between 2 and 8 weeks depending on insulin sensitivity, level of the enzymes involved in fat mobilization and use for fuel, level of body fat, activity level, type of training, etc.). For example, Craig did straight keto for 6 weeks before switching to a targeted ketogenic approach. Using one of the variations mentioned will still work, but it will slow down the keto-adaptation. That will not slow down a fat loss that much (or at all). The problem is more that until you are keto-adapted, you run the risk of getting brain fog, lacking energy, feeling crappy, and have a decrease in performance.

Lucky for me I started my keto experiment while lean and being super insulin sensitive: I’ve been using berberine, alpha-lipoic acid, cyanidin 3-glycoside, and fish oil for a while… the best supplements to improve insulin sensitivity. I have also been using nutrients that improved insulin sensitivity like cinnamon and apple cider vinegar. Furthermore, my body is already efficient at utilizing fat for fuel (because of my photoshoot diet… you can’t get down to 7% body fat if you are not efficient at utilizing fat for fuel). As such, I believe that by week 2 I should be able to go to a cyclical ketogenic approach.

That’s it for the first week.

See you next Thursday, hopefully after a better week!