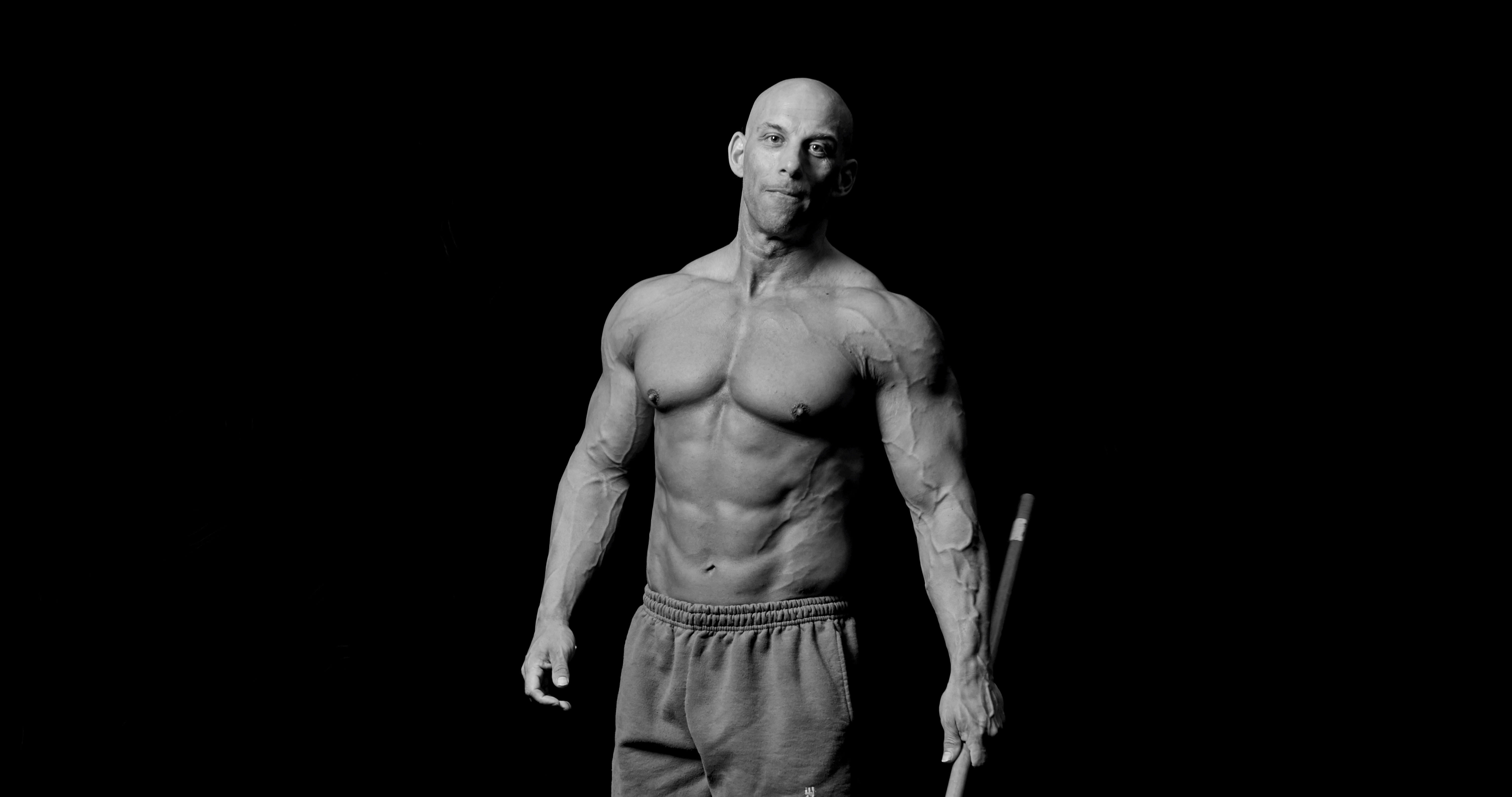 Another week in the books and things are getting easier. Well, they were never “hard” to start with, after all I had been dieting for 14 weeks (well 12 with two weeks of shitty eating in there) so it wasn’t that much of a switch. If anything, I’m eating a lot more now than I was during the 10 weeks I prepared for my photoshoot.

What I mean by easier is that Joe (Binley who is coaching me on keto dieting) and I are figuring out what the best food combinations are and what my optimal intake should be based on my body. I think my optimal intake (at the moment, optimal is to keep the same leanness while adding some muscle) is higher than we both expected. After all, during my photoshoot prep I as down as low as 1600 calories at one point (for 4 weeks). Now, I must be in the 3000-3250 range and I’m not getting fatter. In fact, we had to add some carbs back in (not a lot mind you, not enough to go off keto mode) around the workouts. Only 25-35g spread around workout time (pre and during) but that alone made an amazing difference in my look and quality of my workouts. More on that later.

Training-wise I had to adapt. My plan was to do more of a low-skill CrossFit hybrid with my friend Jason Brown of www.boxprogramming.com, but it just didn’t work out as a style of training while adapting to the keto lifestyle. It will be appropriate in the future when we have my caloric intake fully figured out and when my body will have been keto-adapted for 6-8 weeks (the longer you stay on it, the better you are able to perform in activities with a high energy demand). But for now, this type of training left me flat from too much energy expenditure and that affected my motivation to train. It was also hard to have enough fuel for intense conditioning work. So, I went back to a bodybuilding style that works well for me in my specific situation. More on that later as well.

From a well-being standpoint it’s still awesome. I find myself to be more social with other people, more productive writing and creating (which is a good thing because currently, I’m working on an online certification for the Neurotyping system). I don’t need to take naps, and I’m in a much better mood.

Regarding health, it still seems to be moving in the right direction, or at least not getting worse. I’ve had a blood pressure reading as low as 106/75 one day this week, which is my “personal record”. So, this seems to be in order. My stools are much better formed and my bowel movements are more normal (I used to do a number 2 5-6 times a day, in explosive fashion, now it’s twice a day and solid) which would seem to indicate both better digestion and less inflammation.

I don’t get junk cravings, although I still miss it.

How Am I Eating?

If you read my last blog (https://thibarmy.com/thib-goes-keto-week-3/ ) you know that my caloric/fat intake was increased because I still lost weight too fast and felt really flat on some days. This was done mostly by increasing olive oil intake.

It did allow me to stay fuller for a bit longer, but as the week progressed I still had a big drop in weight, even reaching an all-time low of 192lbs (the way I was training also played a role, note on that in a few moments). Since I started keto, I’ve looked my best at around 198-200lbs. At 192lbs I not only looked small but also less defined, almost like I had loose skin.

So, we increased my food intake once again. Here’s my latest food plan.

IMPORTANT: This is what I am eating at the moment. It might change since we are still working on the ideal plan for me, it is all about individualization. PLEASE do not copy what I’m doing, as it likely won’t be optimal for you.  It might not even be optimal for me yet. Successful body composition changes are all about making the right adaptations to tailor to each individual. I’m only providing it for illustration purposes.

I get home at around 7:15 and have my first meal which is:

Twenty minutes pre-training, I have 15g of essential amino acids and 15g of carbs (Delta Charge by XPN… https://xpnworld.com/produit-xpn/delta-charge/

During training, I have 20g of essential amino acids and 20g of carbs (it’s all one big drink, I drink part of it pre-training and the rest during).

Ninety minutes after my shake I have meal no.2 which is:

Meal no.3 which is eaten roughly three hours afterwards is as follow:

1 cup broccoli and spinach cooked in 10g of coconut oil

I also have a snack of 2oz of nuts thrown where I want/need.

The two main differences are a slightly greater overall caloric intake and the inclusion of some carbs (35g peri-workout).

Now I know what you will think: “aren’t you supposed to avoid carbs when you are keto?”

Of course, the purpose of a keto diet is to become a fat-burning machine and produce ketones to feed your brain. Your body produces ketones to compensate for a low level of available glucose (carbs). It does so to protect muscle (if it produces ketones it doesn’t need to break down muscle tissue to make new glucose from amino acids).

Your brain can only use ketones and glucose for fuel. The lower your carbs intake it, the easier it is to produce ketones.

You do not need to be in a ketogenic state to primarily use fat for fuel. You could consume a decent amount of carbs, 100-150 or even more grams per day and still burn fat for fuel efficiently. BUT you will also feel like crap. There is nothing worse than a low carbs diet without being in a ketogenic state… that’s when your brain might lack some fuel.

Anyway, to get back to my intake of carbs peri-workout. You need to consider these things:

Why only 35g? I know it sounds low as many peri-workout protocols (including some that I’ve used in the past) include 60-120g of carbs (some bodybuilders use even more than that).

I did believe for a long time that you needed at least 60g for maximum effect until Dr. Eric Serrano explained that during a bodybuilding workout we aren’t using as much glucose/carbs as we think. In that sense, 35g will be enough to provide fuel for the typical bodybuilding session (especially considering that I do have plenty of ketones available too). The goal is not to use those carbs to overcompensate glycogen stores, it’s merely to provide enough immediate fuel to have a better workout.

YES, ketones can be used by muscles for fuel, and they are better than fat during high-intensity work. But regardless of how well adapted you are, ketones will never be as efficient at rapidly providing fuel for high-intensity muscle contraction.

Basically, I use enough carbs to fuel the workout I’m doing, but not so much that it interferes with ketosis.

Adding those 35g in (in fact we started out by adding 25g and that worked well too) instantly gave me better workouts. I was stronger and was able to tolerate more volume. In the first session with added carbs I did almost twice the volume I had planned because I felt so good! Without carbs, I would lose motivation and energy around 30 minutes into my session. With the 25g I was able to go for 50 minutes before feeling a decrease in focus, motivation and pump. With 35g I could push it up to a little over an hour.

At the moment, my weight is back up to 202lbs (I had a carb meal Saturday evening) and feeling a lot more solid.

How Am I Training?

As I mentioned in the introduction, my objective was to include a lot more conditioning work. My ultimate goal was in fact to be in good enough shape to go do CrossFit training with my wife once or twice a week and maybe beat her.

I did that for 3 days and the workouts felt horrible. Not because the workouts were not good, on the contrary. Jason Brown from boxprogramming.com is one of the smartest coaches out there. I love how he works (combining the conjugate training approach with CrossFit training) and I will definitely go back to it once I’m either better adapted or move on after my keto experiment (at first, I wanted to run a 6-week experiment, but I’m considering sticking with it).

I was saying that I felt horrible. The reason is that I simply could not power through with the high-intensity conditioning stuff. Ketones likely did not produce fuel fast enough for the muscles during the super high-intensity work. Maybe once I’m more efficient, I’ll be able to handle it better. Or maybe adding more carbs peri-workout would also work.

At the point where I am, I have no illusions about adding a lot of muscle (close to my natural limit) or strength (shoulder is still messed up and I can’t push as hard). So, what I really want is to maintain a good body composition while having fun in the gym. And feeling like you can’t power through the workout is no fun.

So, until I figure things out I went back to a formula that has always worked great for me. It is very similar in structure to the program described in my “Best Damn Workout Plan for Natural Lifters” ( https://www.t-nation.com/training/the-best-damn-workout-plan-for-natural-lifters ) in that I train six days a week using a push/pull division:

I also use the same philosophy as “The Best Damn…”: I do 1-3 preparation/warm-up sets at a RPE of around 7 then I do ONE all-out work set in which I go beyond failure using various methods (rest/pause, drop sets, post-failure iso hold, post-failure partial reps, etc.).

I do at least one exercise per muscle group and up to 4-5 (the back has several “regions” like lats, rear delts, traps, rhomboids and require more exercises). Normally, each muscle gets at least two exercises per workout. I adjust the volume based on how I feel that day.

I will not give you a specific program for one good reason: I have none.

As I indicated in the first instalment of this series, I’m a type 2A which means that I need tons of variation. As such, my exercises and training methods are not set in stone, and I don’t have a precise routine. I have a structure (push/pull) and a philosophy (one all-out set post-failure per exercise), but the rest changes a lot.

I feel that this approach is optimal when carbs are low. You can still trigger growth by going past failure and you do that without using too much energy. I only have 35g of fast fuel (carbs), so I can’t go the high-volume route.

I got quite a few messages about my pugs as I mentioned them as a diet strategy in my last article. This week, I was dog-sitting for a friend, so we had five pugs for four days. All of them slept with us in bed. Still don’t know who snored the most; I’m betting on my wife. 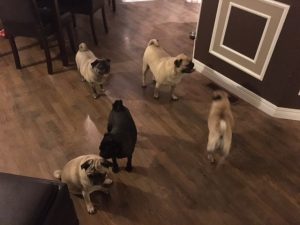