Besides exercise selection, the most important factor involved in developing size and strength is the nature of the load. This is a function of three separate but interrelated elements:

Your body adapts to training-induced stress by making itself stronger and more resistive to physical loading. In simpler words, the more experienced a trainee is, the better his body is built to tolerate training stress.

To explain that fact, we can use a simple analogy: A man starts to work a physically demanding job (e.g. farm work). He does manual labour tasks eight hours a day. At first he’ll get extremely tired by the end of the day and be painfully sore the next morning. But over time, the more experienced he becomes at his job, the daily workload doesn’t affect his body as much. His body has adapted to the very brutal physical demands of his work.

Same goes for strength training (which is basically artificial manual labour). The more years a trainee has put in, the better his body is at handling training-related stress. So it should be obvious that the more experienced a trainee is, the higher the training stress level should be to elicit progress.

There’s also what’s called an “optimal intensity threshold” (OIT) that must be surpassed if maximum hypertrophy is to be stimulated. You can use all the advanced methods in the world or perform sets until the cows come home, but if you don’t train past that threshold you won’t stimulate maximum growth.

The following table indicates the ideal training intensities, depending on the level of the trainee:

Now understand that even if you train under the optimal intensity threshold (or even under the acceptable intensity range), you can still stimulate some muscle growth. However, this increase in muscle size will mostly be of the non-functional type. This is called sarcoplasmic hypertrophy and it refers to an increase in the elements of the muscle cell other than the muscle fibres. As a result of this type of hypertrophy, a muscle can get bigger, but its strength won’t improve much, if at all. 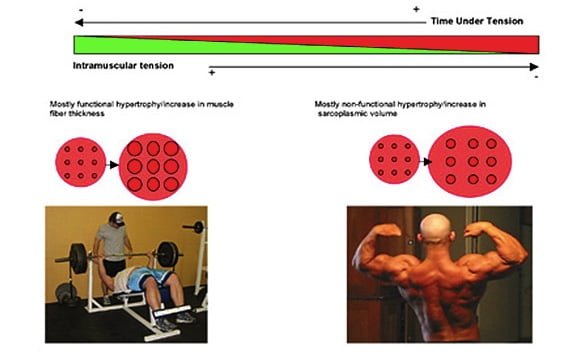 This table displays the different training zones depending on the level of a trainee: 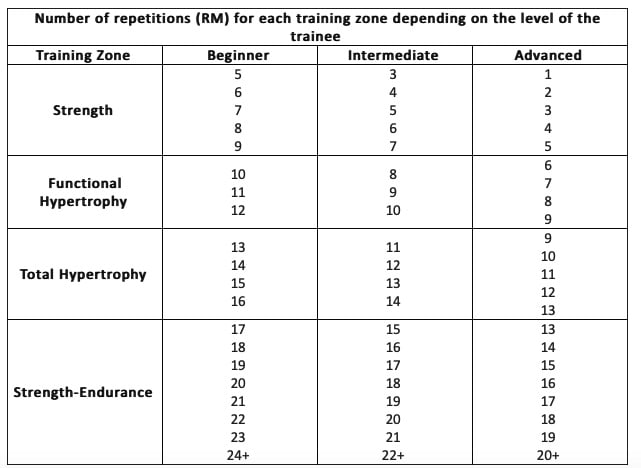 Every once in a while, (the other 20%), it’d be smart to spend some time in the strength zone because this will increase myogenic tone (muscle tonus), creating a denser and harder look. It’ll also increase the capacity of the nervous system to recruit muscle fibres which will enhance the effect of the subsequent bouts of hypertrophy training.

Strength-endurance work (especially when used with short rest intervals) can help with fat loss, vascularization, and even serve as active recovery if the loads used are very light.

The following table briefly explains the benefits of each training zone:

A loading pattern refers to how the sets for one exercise are arranged. For example, straight sets will have you use the same weight and reps for all your work sets while wave loading, pyramidal loading, or plateau loading will vary the load and reps with each set. Let’s take a look at each.

When performing straight sets, you execute one or two warm-up sets then jump right into your working weight, which you maintain for the whole exercise. For example, let’s say that your program calls for 4 x 6-8. You’d do:

It’s possible that due to fatigue you won’t be able to complete the 8 reps on your last set or two. That’s why the prescription calls for 6-8 reps. I believe in giving a 2 rep “give” when designing a program. If you’re in top shape and the program calls for 6 reps but you’re able to do 8, isn’t it better to go up to 8? Sure it is!

And if you’re tired and are not able to perform the prescribed 8 reps, does it mean that you screwed up your workout? No, as long as you can stay within the 2 rep range you’re fine. 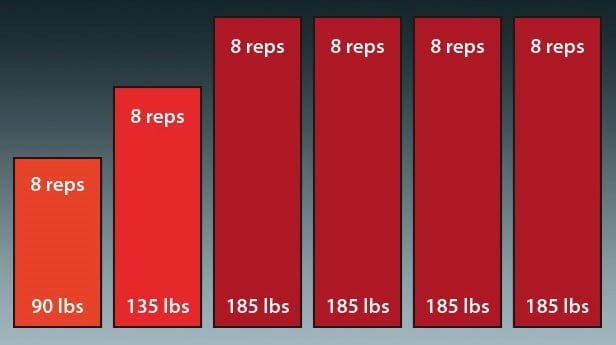 Wave loading refers to a loading pattern where the load and reps change with every set within a wave. A wave is a group of 2-3 sets. Normally 2 waves are performed when training for muscle size, while 2-4 waves can be used when training for strength. You should try to use heavier weights with each new wave.

When planning a hypertrophy wave, you want to have one of the two following patterns:

When training for strength, one of the following wave patterns can be used:

The pyramid schemes are somewhat outdated but can still be used when training for muscle size (not so much when training for strength). In a regular pyramid, you start with a higher number of reps and a lesser amount of weight, and with each set, you increase the weight while reducing the reps. In an inverted pyramid, you do the opposite: you start with a heavyweight for a few reps and decrease the load with each set while increasing the reps.

In a double pyramid you start as a regular pyramid: begin with higher reps and decrease them for your next 2-3 sets, then increase them again for your last set or two. 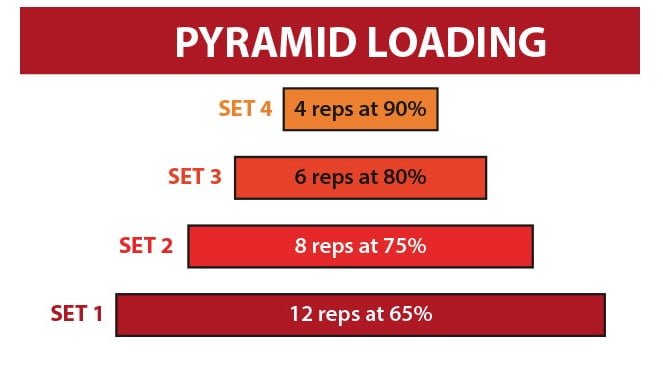 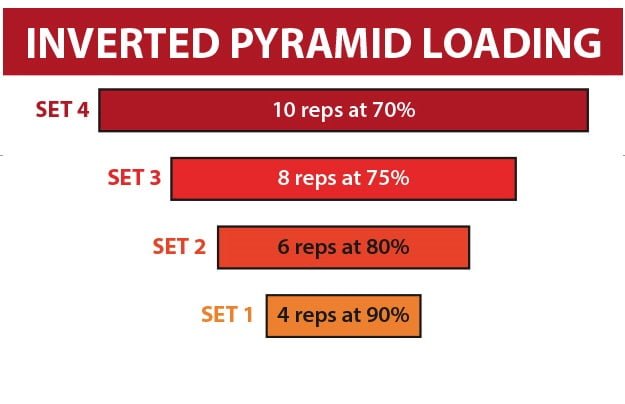 There are two problems with pyramid loading schemes. They either:

The double pyramid, which is somewhat similar to wave loading, is less problematic and should be the preferred pyramid pattern if you choose to use one.

This method is somewhat similar to regular pyramid loading in that the load is progressively increased with each set. However, the number of reps stays the same. This means that only the last 1-2 sets are actually true work sets while the other 2-3 are progressive warm-ups (they still have a training effect though).

This is the type of loading scheme used by Dorian Yates among others. It’s often believed that Yates trained using HIT or Heavy Duty in which one performs only one set of an exercise to failure. Not so! Yates actually performed up to 5 sets of an exercise but only the last one was a true limit effort.

This method is interesting when training in the functional hypertrophy zone because it allows you to get your CNS and muscles geared up for a limit effort gradually without causing too much fatigue (which would impair the limit effort). However, in most cases, the “effective volume” (EV), or a number of reps that are tough enough to cause an adaptation, is too low.

It’s a nice change of pace when you’ve been doing high volume training for a long time though. For example, if a trainee has been on a high volume routine for 6-8 weeks, including 3-4 weeks of flat-pyramid loading with a low volume of work will enable the body to recover from the previous bout of high volume work and a supercompensation effect will occur. This is called delayed adaptation.

There aren’t as many different steps, and more than one set is performed at each step.

You basically perform different plateaus (2 to 4), each one having 2 sets at the same training load and reps. After a plateau, you can start another one either of higher intensity or of a lower intensity level. Here are some examples:

Example of a Simple Progressive Plateau

Example of a Simple Regressive Plateau

Example of a Double Progression Plateau

I personally prefer the double progression plateau because it allows you to be properly prepared for the heavier sets while not being too fatigued to perform well.

As you can see, there’s more than one way to get big and strong muscles! But if you understand the basic scientific principles behind the whole process, you’ll be better equipped to design effective and efficient training programs. Now go do it!