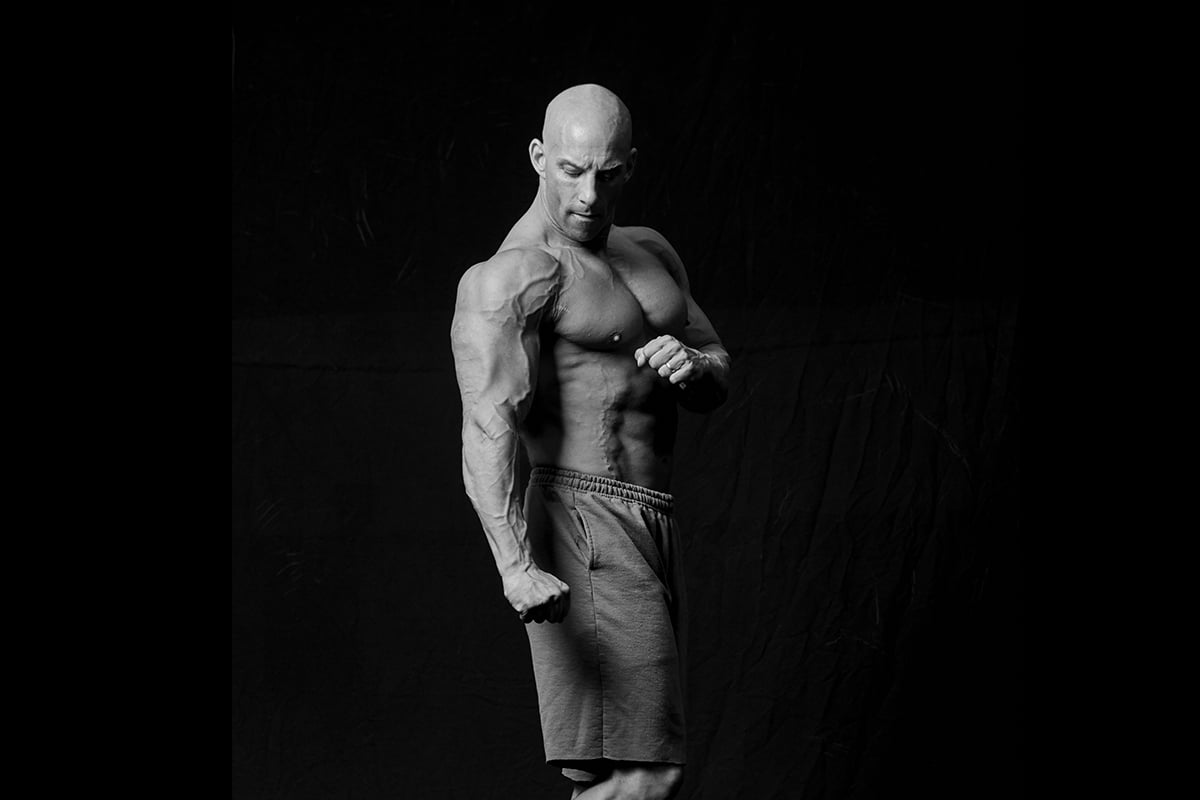 According to the “anti-arm work” crowd, direct arm training isn’t effective. How can you build more size curling 30-pound dumbbells or doing triceps extensions with a 40-pound barbell than you could by rowing 275 or benching 315?

A reasonable question, yet top bodybuilders frequently do 15-20 sets of direct biceps and triceps work and have huge arms. So what’s the answer? Will direct arm work help you or is it a waste of time?

I’ve lived both sides of the direct arm work argument. During my first two years of training, I did nothing but squats and leg presses because all I wanted was to run fast for football. Then as a teenager, after discovering that chest and biceps mass got you respect (or envy), I started doing curls and dumbbell flies every lunch break.

Next, I became the elitist Olympic lifter who made fun of guys who spent hours training their arms, followed by a stint as a bodybuilder who made fun of lifters who were strong but didn’t look great naked. Finally, I became an adult and started to look at things objectively.

There are some legitimate reasons why many experts don’t prescribe direct arm work.

Most real experts (not internet tough guys) who skip direct arm work are strength coaches working with athletes. Football, hockey, baseball players, and MMA fighters already do so much specialized training (lifting, speed and agility work, mobility, conditioning, technical and tactical practices, etc.) that for them to recover and perform, they’re forced to stick with only the best “bang for your buck” exercises. These movements are ideal for improving performance and preventing injuries.

So, these strength coaches don’t include direct arm work because their athletes will build the necessary arm strength from the big, basic exercises. Any additional gains in size that might come from direct work aren’t worth the time and energy that could be spent on more important exercises for performance, or on rest and recovery.

Doing a lot of direct arms work – specifically, biceps work – on top of the big compound upper body lifts can inflame the biceps tendon, especially at the shoulder joint (coracoid process of the scapula and supraglenoid tubercule). The fact is, many “shoulder” injuries in serious lifters are really an inflammation of the biceps tendon, and it’s most often seen during the bench press.

You often hear experts say that “you’ll build bigger arms by doing 315-pound bench presses than you will by doing 15-pound kickbacks.” The argument makes sense. Rarely will a guy have small arms if he can bench 315+ for reps, row 275 with a strict form for reps, or do chin-ups with 60-75 pounds of extra weight strapped to his waist.

Furthermore, if more beginners stopped doing endless sets of curls and focused on getting beastly strong in the bench press, deadlift, squat, and military press, we’d have a lot less “hard gainers” complaining about not being able to add size. A lack of arm size is often just a lack of overall growth.

Another less glorious reason some personal trainers don’t do direct arm work is that the client pays for one hour of training and the coach would rather spend this time doing exercises that have more effect on body composition.

The big compound lifts have a systemic impact on the body. Remember the line about how you’ll stimulate your arms to grow by doing heavy squats and deadlifts? The theory is that these lifts, done heavy, have a greater effect on Testosterone levels.

There are also compelling arguments for including direct arm work into a strength training program.

An early mentor once told me, while getting ready do a set of barbell curls, that “You can’t have a weak muscle if you want to be really strong.” He was an Olympic lifter who at one point held the Canadian record on the clean & jerk with 192.5 kilos at a bodyweight of 90 kilos, so seeing him do curls was quite a shock.

Furthermore, some Chinese Olympic lifters routinely do curls and triceps extensions. Former Bulgarian star lifter Zlatan Vanev did a lot of curls when he came back from an elbow dislocation to help make his elbow stronger.

Bodybuilders are proof that direct arm work builds big arms. Yes, there are sprinters and football players who look great without doing any biceps work, but the reality is that you will never see the arms development of top bodybuilders in athletes who don’t do direct biceps work. That’s not to say that athletes can’t have great looking arms from doing only the basics, just not as huge as that of a high-level bodybuilder.

Furthermore, just walk in any commercial gym on a Friday evening and you’ll have proof that direct arm work can be effective – dozens of teenagers/young adults with toothpick legs, a flat back, yet big and muscular arms.

Due to leverages or muscle dominance, some people won’t build strong biceps or triceps just by doing big basics. They’ll get a huge chest and/or shoulders from bench pressing and a big back and traps from rowing and pull-ups, but very little upper arm size.

These people need direct arm work to make their biceps and triceps grow. If they’re interested in getting very strong on the big basics, then making their weak links stronger is a sure way to improve performance. Sometimes you need to use isolation work to strengthen body parts that are preventing your big lifts from going up.

We used to think that muscle growth required tearing down muscle fibres and that you needed heavyweights to do that. Now we know that there are more processes involved in stimulating growth and that tearing down muscle tissue might not only be unnecessary but counterproductive.

There are three processes that can lead to muscle hypertrophy that don’t require heavy lifting, and are actually more effective when performed with lighter loads and more targeted exercises:

1 – Activation of the mTOR pathway

We know now that the mTOR pathway, especially TORC1, is the switch that starts protein synthesis. Studies have shown that mTOR is activated almost exclusively during eccentric actions, lending some credence to the practice of emphasizing the eccentric phase, but not for the reason once believed (muscle tearing).

However, what’s more, interesting is that you only need an external resistance equivalent to 60% of your maximum to optimally affect mTOR. This is best done by using 60-70% of 1RM and performing very slow eccentrics where you focus on feeling the muscle during every inch of the rep.

It’s the act of stretching the muscle under load that’s responsible for the effect. This type of eccentric isn’t damaging and won’t impair recovery, but will activate one of the main pathways involved in muscle growth.

This is the practice of depriving the muscle of oxygen while it’s doing mechanical work. When a muscle is contracted, blood can’t enter the muscle so oxygen isn’t delivered. If a muscle never relaxes during a set, then blood will stay outside the muscle, and the muscle will go into a hypoxic state.

This hypoxic state has been shown to be anabolic as it increases the release of IGF-1, a very anabolic peptide hormone. Obviously, occlusion and constant tension training are more easily done during targeted or isolation exercises.

This occurs at the highest level when you do “pump work,” or try to swell a muscle as much as possible. The mechanical contraction of the muscle pulls blood and nutrients into the muscle being trained. So if you’re using Plazma™ pre- and intra-workout, you’ll pull powerful di- and tri-peptides inside the muscle you’re training, which means that you’ll have all the material necessary to take advantage of the activated protein synthesis.

Here are the facts:

Direct arm work builds muscle. Any form of resistance training works, so it would be silly to assume that working a muscle hard under load would have zero effect. Load a muscle and make it do mechanical work – adaptation will occur.

The return for the investment of direct arm work is fairly low compared to big money exercises. There’s no arguing that you’ll get a greater overall effect from doing deadlifts, squats, pull-ups, and bench presses than from doing curls and triceps extensions.

Lifting heavy will put on muscle but it’s not the only way. There are several biochemical processes that stimulate hypertrophy that doesn’t require heavy lifting.

Some people will grow big arms simply by getting strong on the big basic lifts (typically those with shorter arms) while others will absolutely need direct arm work if they want their arms to grow (usually longer-armed folks).

Considering These Facts, My Verdict Is:

Beginners should focus on getting a lot stronger and efficient on the big basic lifts as these will have the greatest effect on their physique. At this stage, direct arm work isn’t necessary and shouldn’t play a big role in the workout.

However, as the individual gets stronger and bigger but has yet to achieve his physique goals, he might find that he needs to devote time to direct biceps and triceps work.