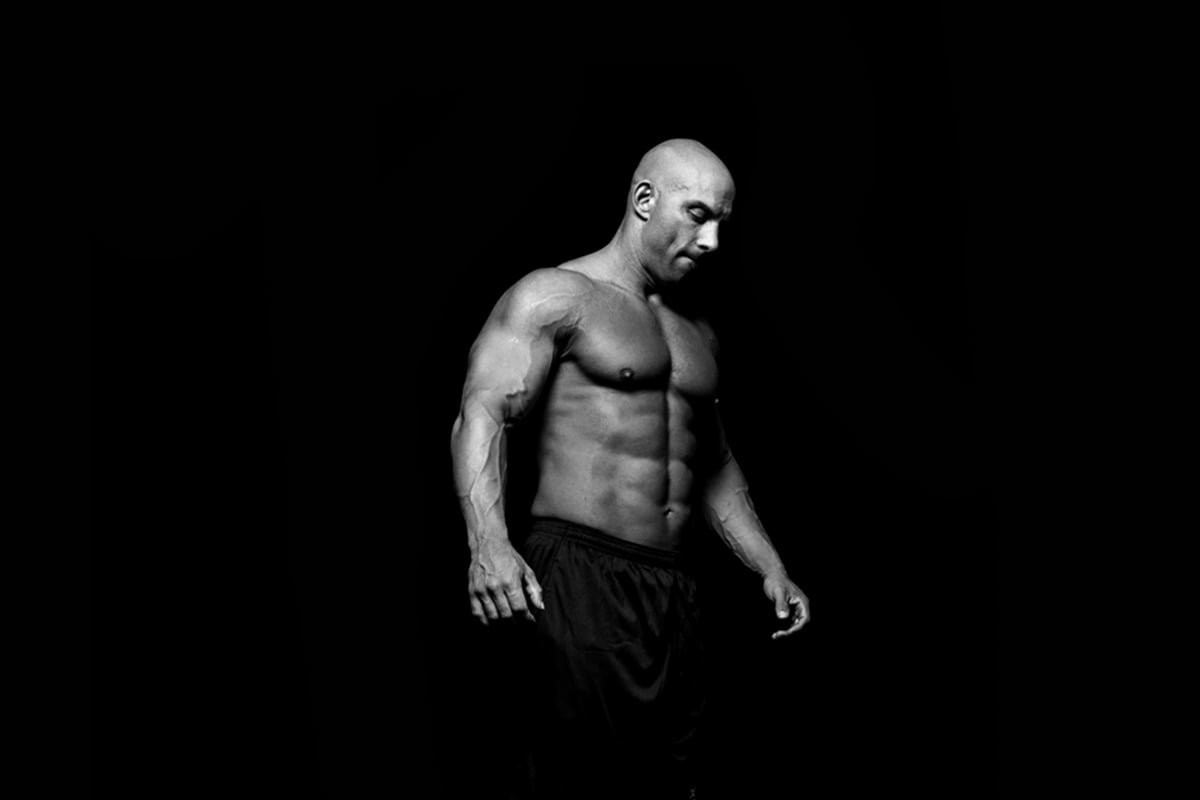 Beef up your body composition

Over the past few weeks, I’ve focused on novel exercises to correct weak areas, effective training programs to try, and training methods to crank up the growth.

My poor brain needs a break!

So, it’s time to deal you a hand of tips and tricks to improve your strength, the way you look, or how you feel. Some of them are training related, others refer to nutrition or supplement strategies.

Regardless, you’re sure to find a few that’ll further you along in your journey toward your ultimate goal.

Insulin sensitivity is crucial to body composition. Being insulin sensitive – as opposed to insulin-resistant – will help you pack on the muscle and drop the fat.

Basically, if your muscles have a higher level of insulin sensitivity than your fat cells, the nutrients you eat will be preferentially shuttled to your muscles.

This is because insulin is the hormone that tells the body’s storing facilities to open up. The three main facilities are the muscles, adipocytes (fat cells), and liver. If one of these facilities responds more effectively to insulin, then it’ll accept more of the incoming nutrients.

Insulin is like a flow of keys running through your body looking for locks to unlock. The main storing facilities all have locks, and when insulin comes into contact with these locks, it opens up the door to the facility, allowing the nutrients to flow in. Now, if a facility has more doors, then insulin will unlock more doors, and as a result, more nutrients will come in.

If your muscles have more locks than your fat cells, that’s a damn good thing. When insulin is released, you’ll shuttle more of the ingested nutrients into your muscles, and less will be left to be stored in fat cells. The end result? You’re one big, ripped sumbitch.

In the opposite situation, where your fat cells have more locks, you’ll have an easier time storing fat and building muscle will be that much harder. A bodybuilder’s worst nightmare!

Muscle insulin sensitivity depends on several factors. Genetics do play a role, but so does your current physical condition, activity level, and nutritional approach.

For example, the leaner you are, the more your muscles will be sensitive to insulin (fatter individuals have, you guessed it, more sensitive fat cells). Someone with more muscle mass will also be more insulin sensitive simply because there’s more tissue to put locks on.

So, right off the bat, if you’re adding muscle, you’re bettering your insulin situation. Similarly, if you lean down to under 10% body fat, you’ll also increase your muscle’s sensitivity.

Physical activity also plays a role in insulin sensitivity of various tissues. When you’re inactive, which is most of the day, your fat cells increase their insulin sensitivity (not good) and your muscles reduce theirs (not good either). Right after a bout of intense physical activity, especially strength training, the situation is the opposite: Your muscles become sensitive (which is the reason why post-workout nutrition is so important) and fat cells become less.

See, your body is thrifty and adjusts itself depending on the current demands. If you’re inactive, your muscles aren’t tired, and they don’t need to be repaired or refuelled. So, in the name of survival, the body puts the priority on storing energy for the long-term (fat). On the other hand, right after hard physical work, the priority switches to restoring the expended energy and repairing the damaged muscle. These things require energy and nutrients. So, the body increases muscle insulin sensitivity to divert more of the energy flow to the muscles, where it’s needed the most.

With all of that accounted for, it’s easy to see that a muscular, lean, and active individual handles insulin better than a skinny-fat sedentary clerk!

Okay, so what’s the trick? Is it simply to “get muscular, lean, and train hard?”

Obviously, this means limiting carb intake when inactive, especially cutting out “bad carbs” like sugar. But, here are four simple and cheap steps you can take to switch the daily balance toward a better body:

If You Play With Tempo, Respect the Movement’s Strength Curve

I rarely lift a weight slowly on purpose. Sure, sometimes you should control the load during the lifting portion, or lift a weight using the constant tension technique, but these aren’t superslow techniques.

However, eccentric tempo can get pretty varied, and it actually should be for optimal long-term results. But, if you decide to use eccentric tempo variations, use them wisely.

So, if you want to reap the maximum benefits of slow eccentric phases or accentuated eccentric training, do so mostly with extension/pushing movements. To get the same benefits from pulling movements, use isometric squeeze/hold at the peak contraction position of the pulling/flexion movement.

This doesn’t mean that you can’t use a slow eccentric tempo for flexion/pulling exercises, or an isometric hold on extension/pushing exercises. Any method that challenges the muscles, and is done according to the principle of progression, will lead to gains. Some methods are just ideally suited for certain exercises.

Here are some examples:

But, like pretty much everything under the sun, there are also some exceptions to the rule. For example, the leg extension responds well to isometric holds despite being an extension movement. Also, exercises with a very short range of motion (shrugs, wrist curls, calf raises, etc.) don’t respond well to a slow eccentric tempo; an isometric hold is a better choice for these.

A lot of people, heck most of us gym rats, are often faced with the tough decision of trying to put on as much size as possible or trying to get as ripped as possible. Both will take us closer to our final objective of being lean and muscular, but at the same time, both will also give us the impression of getting further away from that same final objective!

Why’s that? Most serious trainees have the ultimate goal of what they want to look like. Most of the time this goal is actually quite general – they see themselves as being huge and shredded. Some are more precise in their goal-setting, for example, you might want to be 215 at 6% body fat. But, in most cases, our goal is simply to be big and ripped.

To accomplish that, we must both gain size and lose fat. While we’re focusing on one goal, like losing fat, we feel that we’re actually getting farther away from the finished product because we have the impression of getting smaller. And, while we’re leaning out, we often feel that we’re wasting time which could be used to gain more size.

Not to mention that gaining a lot of sizes while losing fat is almost impossible to do, which means that our goal of being huge will be postponed some. Then again, if we bulk up too much, we’ll make the process of losing fat much longer since we’ll have more of it to lose.

Basically, focusing on one of the two main goals will never satisfy you 100%.

This has led many a trainee to jump from one goal to the next before being able to accomplish anything either way. For example, you’ll decide to really put on size, but after a few weeks, you feel fat and decide to stop and cut for a while. Then you begin to feel small, and you decide to bulk again, and so the dance continues.

While alternating periods of maximum growth and periods of fat loss is a good approach (especially if you already have a decent amount of muscle to start with), changing goals too frequently is the best way to get nowhere and end up looking the same years from now.

How much muscle do you really expect to gain during a four-week mass gaining phase? I’ll tell you: two pounds of muscle tissue if everything is done perfectly. You’ll, of course, gain more weight, but it’ll be from intramuscular water retention (half a pound for every pound of muscle gained), increased glycogen storage, extracellular water retention (as much as five to seven pounds if you’re ingesting a ton of carbs), and some fat.

But, when it’s all said and done, you’ll have gained two pounds of muscle.

Then you decide to cut for four weeks, a period during which you won’t gain any muscle (you might even lose some if you aren’t smart about it).

So, during an eight-week cycle, you’ll have gained one or two pounds of muscle and maybe lost four pounds of fat. At that rate, it’ll take you years to drastically change your physique.

To make an appreciable gain in muscle mass, one that’ll make a visual difference, you need to devote at least 10 to 12 weeks, preferably more.

On the other hand, fat loss phases can be shorter, because fat loss is faster than muscle growth if you know how to do it properly. Losing two or three pounds of fat per week is fairly easy; gaining the same amount of muscle will take you five times as long.

So, one strategy is obviously to focus 100% on gaining as much size as possible for three to five months, or more. This means eating for growth, which can lead to excessive fat gain.

While it doesn’t necessarily mean that you’ll gain a lot of fat, it’s easy to overdo “eating for growth,” and fat gains can sneak up on you without you even noticing that your gut has suddenly eclipsed your penis.

So, while this approach is adequate to put on a lot of sizes, it might not be ideal if your final goal is to be big and ripped.

However, the opposite approach of not eating enough to maximize growth in fear of gaining fat isn’t any better. By absolutely wanting to avoid excessive fat gain, you undoubtedly risk-limiting (or even stopping) your rate of muscle growth.

The solution is the inclusion of “control days” within a long mass gaining phase. Simply put, control days are days in which you eat below maintenance and follow a low carb (less than 50 grams), moderate fat (around 0.3 to 0.4 grams per pound), and high protein (1.5 to 1.75 grams per pound) setup. You also perform cardio or metabolic work on these days.

The control days will:

Here are some rules to follow when planning control days:

Assess your progress every week and always on the same day. The day of the assessment should be the one after a control day because that’s where you’ll retain the least water and glycogen, so it’ll be much easier to measure actual muscle growth. From that assessment, decide if you need to stay the course or change your diet (either by adding or removing control days or by increasing your food intake).

This approach will allow you to focus on eating and training for maximum growth for a long period without the fear of adding an excessive amount of fat. Some fat gain will undoubtedly occur when trying to put on a ton of size, but if this method allows you to only put on five to eight pounds of fat instead of 15 to 20 pounds to gain the same 20 pounds of muscle, then it’ll be a huge step in the right direction.

For one, you’ll look better year-round, and two, it’ll be a hell of a lot easier to diet off the gained fat so you won’t risk losing your hard-earned muscle when you do decide to showcase your striations.

Whether you’re after improved body composition, tweaked exercises, or just a better bulk, you’re sittin‘ pretty. With this info in your bodybuilding deck of cards, you’re now the guy at the table with aces up his sleeves.