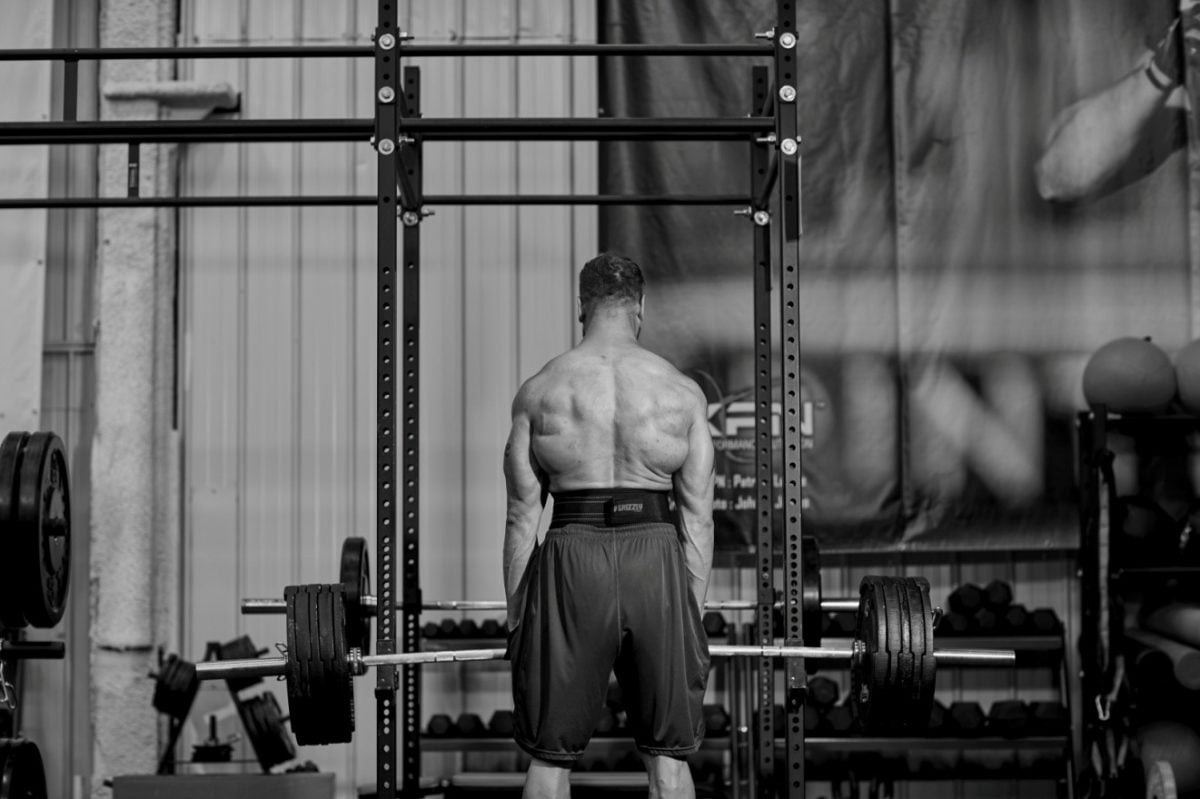 I’ve realized over the years that the people who are the most attracted to my work are the powerbuilders: guys (and gals) who want to build muscle but are equally interested by the performance side of things.

I can’t say that it surprises me because that is exactly how I would define myself and for that reason, my favorite training methods and loading schemes have always been those that promote both an increase in size and strength.

My two favorite loading schemes have always been waves and clusters. Both are focused on lower reps and heavier weights, while also providing enough volume to promote muscle fibre fatigue and lead to muscle growth. Both also rely on a phenomenon called “post-tetanic potentiation” to increase muscle fibre recruitment, leading to better performance.

One variation of wave loading that I’m really fond of when my goal is to build more muscle is the 1-6 short contrast wave.

It’s a loading scheme that I learned from Charles Poliquin but that was developed by Olympic lifting coach Dragomir Cioroslan (from Romanian, trainer of Nicu Vlad, who later coached in the US and who was himself an Olympic medalist).

It’s fairly simple on the surface: you alternate a set of 1 rep with around 90% of your max and a set of 6 reps with 75-85%. This is one “wave” and you do 3 or even 4 such waves in a workout. However, like with many method, the Devil is in the details, and most people get suboptimal gains from this formidable method by not applying it properly.

I will discuss exactly how to apply this loading scheme to get the most results, but first let’s examine why it works.

Neuromuscular Post-Tetanic Potentiation (PTP), also called Post-Tetanic Facilitation refers to a mechanism by which a muscle’s capacity to produce force is increased by a previous high-force action.

Basically, when you produce a very high level of force, your capacity to recruit muscle fibres and make them fire fast (firing rate) is increased for a certain period of time leading to a greater performance potential, provided that fatigue does not counterbalance it.

The more force you produce, the greater the potentiation is. Weights of 90% or more (or explosive movements, since Force = Mass x Acceleration) have the greatest impact. Maximal overcoming isometrics also have a strong effect.

Note that the fast-twitch fibres are more sensitive to the PTP. As such, when using this method, you will be able to more efficiently recruit them as well as increase their firing rate. This is responsible for the increase in force production potential. Another benefit is that the fast-twitch fibres are the most prone to growth; the more you can recruit and fatigue them, the more muscle growth you will stimulate.

The effect of this potentiation starts as early as 5 seconds after the high force contraction and lasts for a few minutes, peaking at around 2 minutes and some effect lasting up to 5 minutes (the effect being gradually lower after the 2-minute mark).

This phenomenon is the foundation of the 1-6 loading scheme: you are using a heavy but non-fatiguing single rep before doing a set of 6 reps. 6 reps is still a duration/loading that heavily targets the fast-twitch fibres. Doing the heavy single prior to the set of 6 will improve your performance on that set and make it more effective at stimulating the fast-twitch fibres to grow.  This is what makes the 1-6 loading scheme an amazingly effective muscle-growth method.

Doing 1-6 Properly: Weight Used For The Sets Of 1 Rep

The main mistake people make when using the 1-6 principle is not understanding that the work sets, the sets that are the most important, are the sets of 6. The heavy, non-fatiguing single is only there to make the sets of 6 more effective.

This lack of understanding leads people to push too hard on those sets of 1 rep, trying to push more and more weight. Even trying to reach a 1RM. This will have a negative impact both on the workout itself (by fatiguing the neuromuscular apparatus, leading to a decreased performance) as well as on recovery after the session.

The sets of 1 should use a weight that is heavy enough to have full muscle fibre recruitment and a high firing rate but does not constitute a fatiguing effort nor lead to a change in movement technique.

Full fibre recruitment occurs at around 80-82.5% and I find a 90% weight to be optimal for our purpose since the firing rate will also be high. Plus, it is a load at which you can maintain optimal technique and not drain the nervous system.

Also, the weight used for the 3 or even 4 sets of 1 rep done in the session should stay the same from wave to wave.

Doing 1-6 Properly: Using The Right Amount Of Rest Between Sets

The second mistake made is not using the optimal rest interval between sets.

As explained earlier, potentiation peaks at around 2 minutes. After which it slowly comes down until the effect has vanished after around 5 minutes.

This tells us that the ideal rest period after the sets of 1 rep is roughly 2 minutes. Stronger athletes might take up to 3 minutes, but it should not be necessary because a single rep at 90% should not create a lot of fatigue.

However, taking only 2 minutes of rest after the sets of 6 repetitions is very likely too short for most people: 6 reps performed close to your limit will create much more muscle fibre fatigue and some energy depletion, as well as accumulation of metabolites that will decrease your potential to perform.

Resting only 2 minutes after those sets will likely not allow you to recover fully before the next wave, and as we will see, the goal is to gradually increase the weight for the sets of 6 from wave to wave. So, we want full recovery after each wave.

Individual recovery varies but for most people this means 3-4 minutes of rest after the sets of 6 reps.  People who easily get bored in the gym when they are resting for too long can do a non-fatiguing exercise (e.g. band pull-aparts) after 2 minutes of rest to avoid dropping out of the zone, but it should be an exercise that will not involve the prime movers of the main lift.

If the 1-6 loading scheme is done properly, with the right rest intervals and using the correct weight for the sets of 1, you should be able to perform better from wave to wave. As such, you should try to add more weight on your sets of 6 from wave to wave.  This is in fact a great way to autoregulate your training: if you know after a set of 6 that you can use more weight you add one more wave, if that set of 6 is your limit for the day or you only did 5 reps, stop the exercise.

The first wave should be fairly conservative, using around 75% of your maximum and you go up by around 2.5% on each wave.

As such, it is one of the best methods to build strength. While the 3/2/1 wave loading strategy is the best loading scheme to improve maximal strength by maximizing neurological improvements, the 1-6 method will lead to the greatest strength potential by acting on the two main elements that increase it: muscle mass and neurological efficiency. The 1-6 method will not give you the 1RM strength gains that the 3/2/1 wave will, BUT it builds the most strength.

Isn’t that contradictory? Not at all! There is a difference between building strength and demonstrating strength. When you build strength, you improve the potential of the muscles and nervous system to produce a lot of force. Demonstrating strength is all about being able to use that potential in a single maximal effort. The latter is as much a skill as it is a physical capacity and thus needs to be trained: to be good at maximum effort, you must do maximum efforts.

Maximal effort work (like ramping to a 1-2RM or 3/2/1 waves) will rapidly increase maximal strength, but it cannot increase strength potential as effectively because of its limited impact on muscle mass. I like to use methods like the 1-6 short wave contrast for 4-6 weeks, then do 3/2/1 waves for 2-3 weeks to build maximal strength.

The 1-6 loading scheme is one of the best ways to train if you are a powerbuilder equally interested in strength and size, but it needs to be applied properly. Hopefully, this article will allow you to do that and reap the benefits with a stronger and more muscular physique.