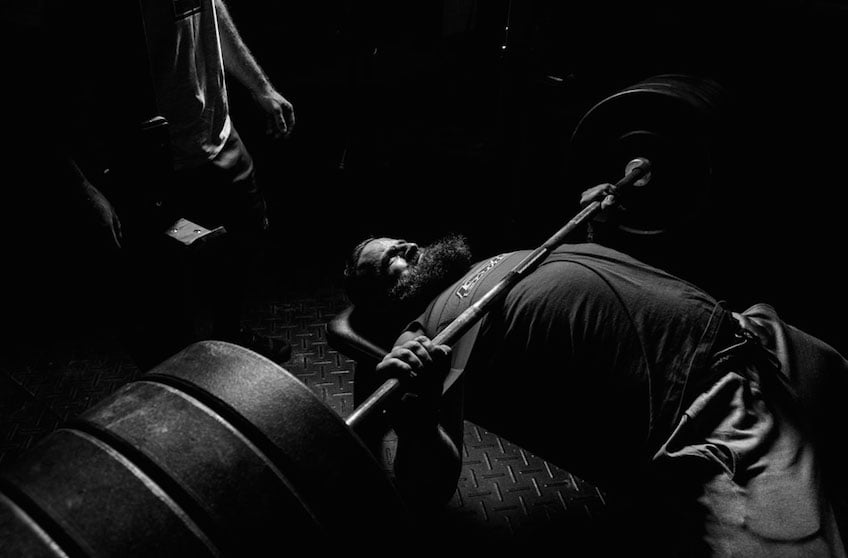 When you train for strength there is a very real problem you might be faced with: how hard should I push myself on my sets? We hear so many different thoughts: some say you need to go pedal to the medal all the time, others say you always need to keep 1 rep in the tank and keep the real exertion for meet day.

In powerlifting, there is a very high neurological component, especially compared to bodybuilding, which is mostly muscular in nature. If you push yourself too hard at the wrong moment, you might drain your CNS resources which will have a negative impact on your performance. On the other hand, if you don’t push yourself hard enough you will not stimulate maximum gains.

As such, we must have a system that helps us properly select our training weights. For a long time, percentages were the most common way of selecting training weights.  In recent years, another approach has also taken a strong stance in the powerlifting world: the RPE system (Rate of Perceived Exertion).

In this 2-part article, I will explain the RPE concept. In this first article, I will discuss its strengths & advantages. In the second part, I will switch gears and discuss the shortcomings of this approach.

The Rate of perceived exertion concept, known as RPE, is used more and more in training programs by powerlifters & strength athletes. For those who are new to the concept, the RPE-based training is a way for athletes to quantify the difficulty of their training sets on a scale of 1-10 based to their perception.

A more elevated RPE means a more difficult set and less reps left in the “tank” (with an RPE of10 being a max effort). Here’s the chart used by most powerlifters:

It’s a way, just like the percentage-based system (% of 1RM), to quantify the progression of an athlete in his preparation and periodization/programming. Scientifically speaking, research shows that RPE rating have a strong correlation with the percentage-based system as well as a strong inverse correlation with the mean velocity (speed) of the concentric part of a lift (Helms & al. 2017). In other words, both systems often demonstrate a similar speed in the lifts, which means that this system is quite accurate.

What’s interesting is that those same studies also show that elite athletes tend to be better at gauging their own RPEs than novice athletes (Zourdos & al., 2015).

In the strength training world, the percentage-based system and the RPE system are the 2 main ways to assess the progress of athletes. A not yet published but very interesting study by Eric Helms compared the systems for both the squat and bench press. Both systems produced equal results in power and hypertrophy development, but RPE system results were shown to have a slight advantage on strength development (Helms & al. Pre-submission). Even though this science is not yet perfectly clear, both systems have pros and cons and as previously mentioned, we’re first going to cover the pros of the RPE system.

First, using the RPE system can be a great way to challenge the kinds of athletes who need constant stimulation and variation in their training programs. For some people, following a program where every load is planned in advance can become quite boring and can straight up kill their motivation over time – even when the program might seem perfect on paper. If you’re a coach or trainer, you’ve probably written a couple of those “man-this-is-the-best-f*****g-thing-I’ve-ever-written” training plans.

You had all the weights planned out in advance for months for your client with the perfect periodization phases with all the perfect exercises and all, and yet a couple of weeks into their training program their performance started to drop.  They may have even started doing other exercises behind your back, lifting different weights (usually much heavier) than prescribed, and eventually just stopped following your program and your ego as a coach may or may not have plummeted for a minute…All of this because the athlete lost his drive. That being said, the RPE system is ONE way to give that kind of individual a bit of control on what they’re doing, which will, in turn, challenge them and keep them motivated.

Second, the RPE system can and should be used as an autoregulation tool. None of us can perform at our best every day, we all feel a little down and fatigued once in a while and unfortunately, life isn’t as black on white as a planned training program. The reality is that we all have bad days more often than we would like. Variables like sleep, caloric intake, stress (physiological, emotional, or psychological), can all alter your recovery and energy, which can all screw up your performance.

The good news is we also have great days where weights feel lighter than normal, we feel aggressive towards lifting. We feel like Conan the Barbarian walking around the gym with our chests puffed up & ready to crush our enemies, see them driven before us, and hear the lamentations of their women!

Well, the RPE system can perfectly modulate the weight on the bar according to your energy on any given day. For example, if you must perform 5 sets of 3 at RPE 8, you might put 315lbs on the bar on a bad day, where on a good day you might put 335lbs on the bar. The RPEs allow you to adapt your training sessions according to your level of recovery, energy and life variables. Remember, you can only grow as much as you can recover. RPEs might even allow you to reach a PR on a good day.

Similarly, they can also be a useful tool for athletes returning from an injury. At the time, their 1RM might not be quite as accurate and using an RPE approach might help them re-build the strength they have potentially lost. The same applies for seasoned powerlifters: their competition lifts are often not a suitable standard to base their training sessions off. The pumping adrenaline and a proper peaking phase will add some numbers to their lift on meet day, but that doesn’t mean they’re able to lift those same numbers off-platform, in a gym, when no one is looking. If a 200lbs lifter can squat 550lbs in a meet for example, he might only be able to squat 500lbs on a regular Friday night after a long shift at work. In this case, that would mean an 8% drop in terms of squat strength, which will not represent the relative intensity desired if a percentage-based program is used. The RPE system is there to gauge the intensity of the lifts based on the present moment, not the perfect moment.

Finally, RPEs can be very useful if you don’t know your 1RM on a specific lift. Most powerlifters know their max on the squat, bench and deadlift, but don’t necessarily know their true 1-rep max on variation or assistance lifts like front squat, close grip bench press or opposite style of competition deadlift, to name a few. If you use a percentage-based program, you can either guestimate it, use percentages relative to your max competition lifts (front squat = 85% of back squat), or do an AMRAP set and use a formula to guestimate. Those can sometimes be inaccurate or complicated. A very simple way to program your assistance work would be to use RPEs.

The RPE system is good because…

1- It’s a source of motivation for some athletes.

2- It’s a great way to autoregulate your training based on recovery factors.

3- It can be closer to the relative intensity desired in case of an inconsistent 1RM.

4- It can be a useful tool if you don’t know your 1RM on a specific lift.

Overall, it’s a great tool and it has been proven to be effective with some athletes. The question remains, is it the best system for everyone? This is what I will discuss in the second part of this article. Stay tuned!