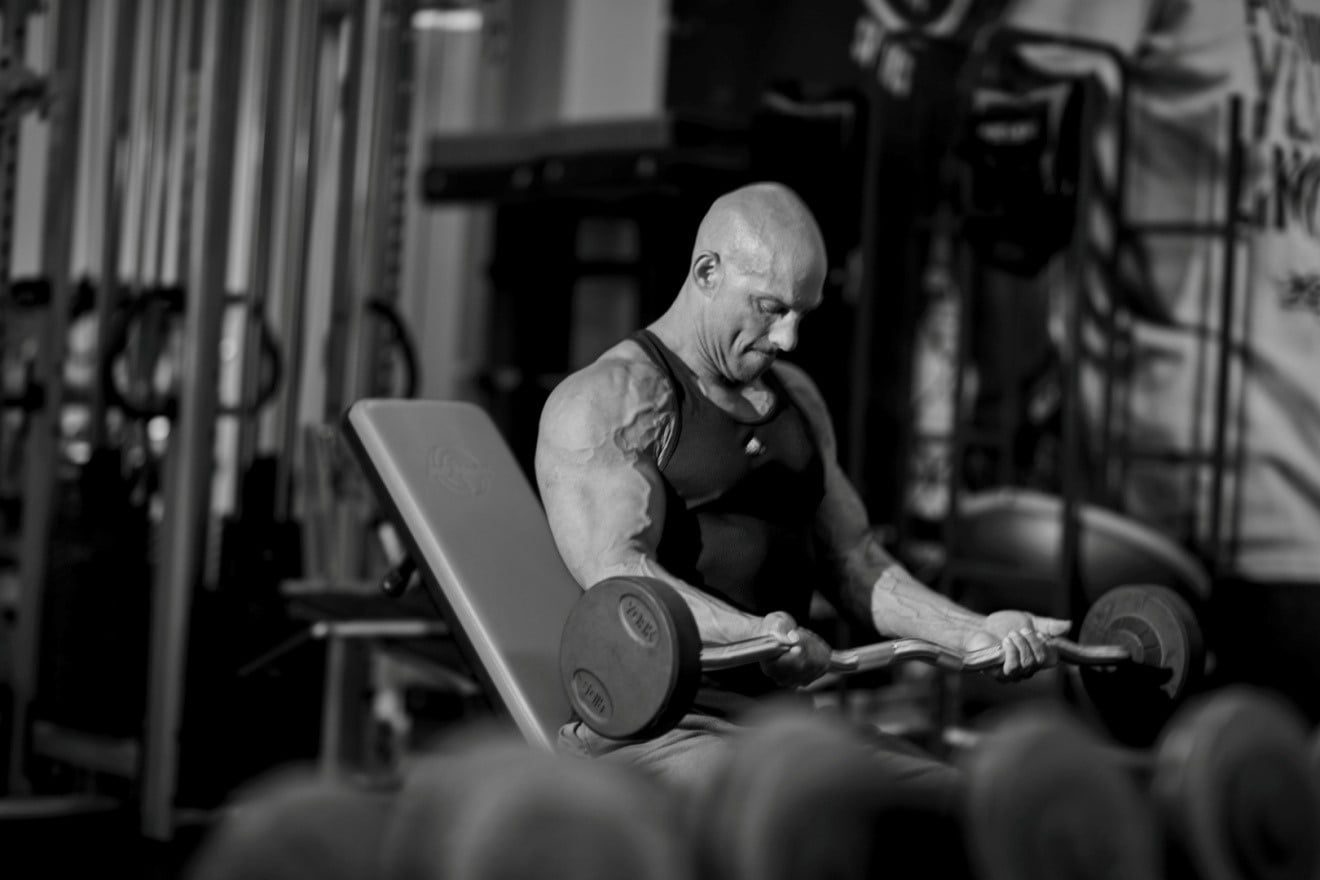 We all want quick tips for bigger arms because very few of us are satisfied with the size of our arms. Getting bigger arms is an obsession for most male (as well as more and more female) trainees. I would say that the three most popular training goals I’ve seen are: 1) getting bigger arms 2) bench pressing more weight and 3) having a 6-pack. I will address the first one. Here are a few arm training tips that you can use to stimulate new arm growth or to fix lagging biceps or triceps.

Train The Brachialis Before The Biceps

I learned this one from John Meadows. Few people actively try to develop their brachialis when training the arm flexors, and it’s too bad because a well-developed brachialis will give a thicker look and might even help you build more of a peak to your arm. Those few who do include direct work for the brachialis normally simply add some hammer curls at the tail end of their biceps workout. This causes several problems when it comes to the brachialis: 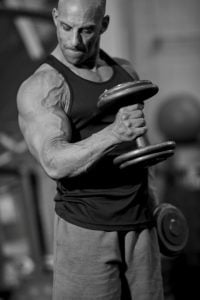 And it will even make the subsequent biceps exercises more effective: since the brachialis will be more fatigued, you will rely even more on the biceps when doing supinated curls.

Slower For Brachialis, Faster For Biceps

Another reason why few people a well-developed brachialis is that it responds better to slower tempos, especially in the eccentric (lowering phase). In fact, to better target the brachialis you should squeeze for 1-2 seconds at the peak contraction position and lower the weight slowly. Most people use too much weight for curls and as a result, they have to use cheating or momentum to get the weight up and they rarely control it on the way down, let alone use a slow speed.

This means that it will be even harder to stimulate the brachialis to grow. While it’s fine to try to accelerate the weight on the way up (without cheating) and lowering it fairly fast (but still under control) when targeting the biceps, if you want to target the brachialis you should focus on flexing the muscles on the way up and lowering slowly. You don’t have to go slow on the way up, but don’t accelerate too much either, think about flexing against the weight.

I find biceps/arm flexors to respond better to longer sets where you accumulate a lot of metabolites (lactate and hydrogen ions) which stimulate the release of local growth factors. While I prefer to train the triceps heavy, biceps respond better to sets where the muscle is kept under tension for 40-60 seconds.

This is best achieved using a constant tension repetition style. Simply put, you should never stop flexing your biceps at any point in the set. I also recommend avoiding positions where muscle tension is reduced, which is why when doing a growth factor set for biceps I like to shorten the range of motion by taking out the first and last 10% of the range of motion (so don’t fully extend on the way down and don’t reach full flexion on the way up). Note that I use this shortened range of motion only when doing constant tension, growth factors accumulation sets.

The way you reach that 40-60 seconds under load is not that important, but I prefer methods where you don’t use much intra-set rest. Resting (for example rest/pauses) will allow for the clearance of some of the lactate and the entry of oxygen into the muscles, which will reduce growth factors release. As such, I like to use things like full reps + partials (doing full reps to failure than doing as many partial reps as possible) or full reps + isometric hold (doing full reps to failure then holding a certain position for as long as possible while flexing the biceps). I also like mechanical drop sets: using three different variations of the exercise and doing them without rest, going from the weaker to the stronger. For example, reverse dumbbell curl + supinated DB curl + hammer curl. You would use the same weight for all three, go to failure every time and don’t set the dumbbells down, it’s one set. Drop sets would also work, but only if you can decrease the weight really rapidly to avoid having too much rest time.

Triceps respond well to heavier work but also need to be pumped up to grow maximally. One technique I like to use is the contrast drop set. This is very simple: start the triceps exercise with a heavyweight; something you can lift for 4-6 reps in good form. When you hit failure, you decrease the weight significantly (by up to 50%) and do slow and squeeze reps to failure.

This approach will allow for more thorough fibre fatigue and muscle stimulation. The heavy work also has the benefit of potentiating the nervous systems and as such, you will be able to better contract the triceps and recruit more fibres on the lighter portion.

I prefer to use this method on isolated exercises like pushdowns or lying DB/bar extensions. It can be used on big lifts like a close-grip bench press or dips, but I find that the residual fatigue from set to set is more important than with isolated exercises. As such, it’s hard to do more than 1-2 such sets on compound movements without having to decrease the weight by a lot, while you can easily do 3-4 on isolated exercises without much of a drop.

One method I really like for rapid biceps growth is to superset one peak contraction exercise using the constant tension method and one exercise where the biceps is placed in a stretched position.

Here is an example:

At the end of the set you can even hold the stretched position for 15-20 seconds.

The contracted movement using a constant tension technique will maximize the pump and accumulation of local growth factor. The stretched exercise will increase IGF-1 receptor sensitivity and maximize mTor activation.

Of course, you can use different exercises. For the peak contraction exercise, you could use a preacher curl, lap curl, machine curl, cable curl, etc. For the stretch exercise, you should stick with variations of the incline curl.

Speaking of stretch stimulation, if you have read my article on loaded stretching you know that it can be a powerful tool to stimulate muscle growth. It does so via several mechanisms:

For that reason, I like to finish off a body part with some loaded stretching. I like to shoot for 2-3 minutes under load. You won’t be able to do that all in one set because you should use a decent weight. You will need 3 to 6 mini-sets to get to 2-3 minutes but try to take only very short breaks between bouts of loaded stretching; 10-15 seconds at the most otherwise you will lose the growth factor releasing benefits.

For the biceps, you can hold the lying Maltese position with KBs or DBs: 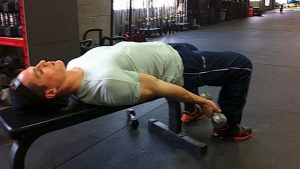 As fatigue sets in, the arms will go down lower and lower but still try to keep the biceps tensed.

You can also hold the stretched position of an incline dumbbell curl.

For the triceps, you can use the lying DB extension stretch: 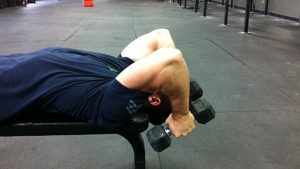 Bend the elbows as much as possible, then try to bring the elbows as far down as you can, without opening the elbows up. As you get fatigued you will also move lower and lower, that’s fine and desired, but still fight to keep the position.

While getting bigger arms is not as glorious of a goal as improving performance, being healthier or squatting more weight, it remains one of the primary objectives of a vast majority of trainees… not all of them will admit it, but none of them would say no to bigger arms! Hopefully, this article will have helped you find a few new ways to get ready for the gun show!