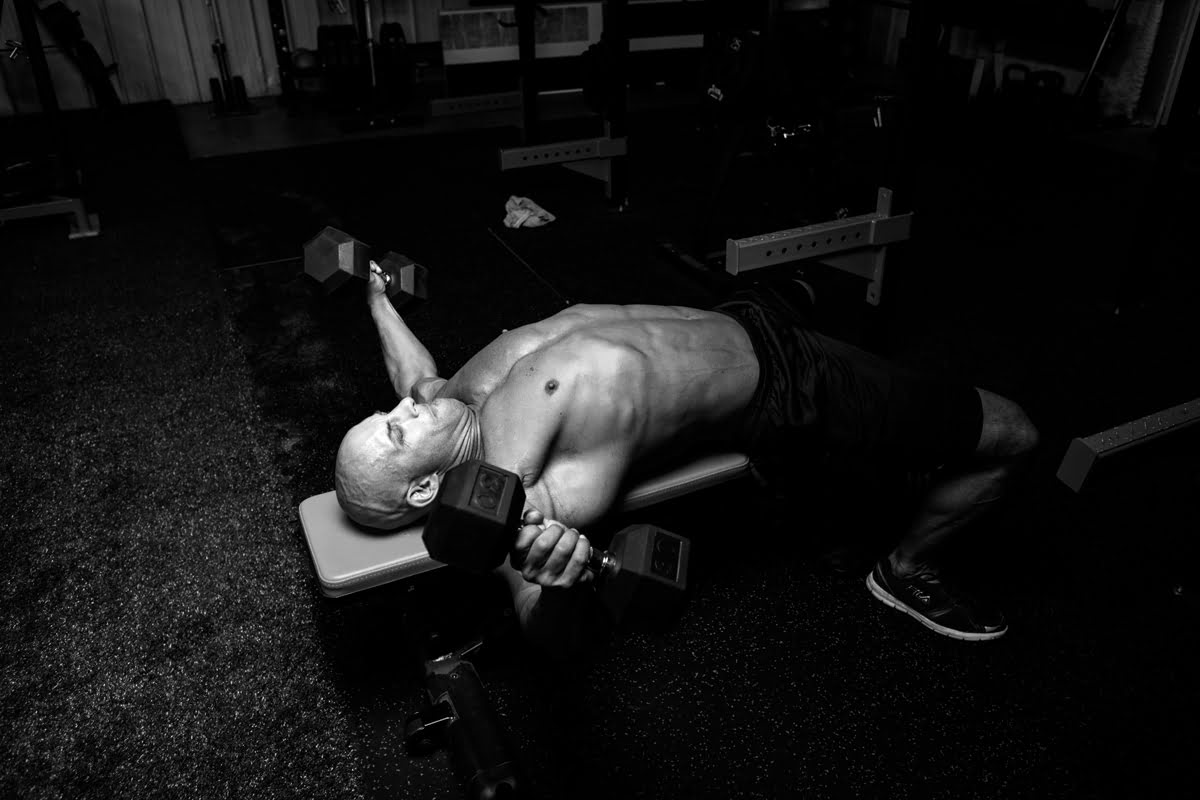 Loaded stretching: one of the most powerful and versatile training method

I hate stretching… hate it! It has always felt like a total waste of gym time and is boring as hell. But neglecting it can lead to big problems down the road, which is why I love loaded stretching: it doesn’t feel like a waste of time because I’m actually also building muscle and getting an amazing pump from it.

Want to learn about this amazing method that will help you add new muscle to your body while also making you bulletproof? Then read on!

The concept of stretching a muscle while simultaneously contracting it to build muscle is nothing new:

Chuck Sipes was hanging from a chin-up bar with a weight attached to his waist as his primary lat builder as early as the early 1960s!

Dante Trudel, inventor of the popular DC training bodybuilding method, became an early proponent of loaded stretching for bodybuilding and was the first one to popularize the use of heavyweights to load stretches.

In the performance world, Jay Schroedder became a huge advocate of long-lasting loaded stretches not only to build muscle, but also to work on proper muscle recruitment patterns.

At about the same time, Tony Schwartz wrote a chapter on this type of training in my book “Theory and Application of Modern Strength and Power Methods”.

All that being said, we must not forget that this type of training actually originates from the training of gymnasts and likely dates back more than 60 years.

The concept is simple: put a muscle (or several muscles) in a stretched position while also contracting it hard. Basically, you are stretching a tensed muscle.  This type of training can increase size, strength, performance and help prevent injuries.  Plus, it gives very rapid results!

Loaded, or tensed, stretching is very effective at stimulating muscle growth. Here are the reasons why it works.

Loaded stretching significantly activates mTor because it combines the two types of contractions that have the greatest impact on mTor: accentuated eccentrics and placing the muscle under load in the stretched position.

However, to make these types of muscle actions effective at activating mTor, you need to use a significant external load. A general guideline is that if you can hold a position for longer than 1 minute, the load is insufficient

When a muscle is contracting hard, blood flow to that muscle is restricted. The same thing happens when a muscle is stretched. So loaded stretching, which combines both conditions, creates a very significant restriction in blood flow to the muscle.  This has two effects: 1) it prevents the disposal of metabolites (lactate and hydrogen ions, for example) and 2) it deprives the muscle of oxygen.

Both of these conditions lead to the release of local growth factors that can help with hypertrophy. Specifically IGF-1 an it’s splice variant MGF which are likely the most anabolic hormones in the boy.

When the body senses that the working muscles lack oxygen and can’t get rid of the accumulating metabolites (because blood to the muscles is restricted) it will try to divert more blood flow to the working muscles and to increase cardiac output. If you maintain the stretch and contraction, blood flow continues to be restricted.  When you finally release the muscle tension, there is a hyper-compensation in the amount of blood that flows to the muscles. If that blood is loaded with nutrients (pre-workout nutrition), then you can shuttle more nutrients to that muscle, which can also contribute to protein synthesis. Furthermore, when loaded stretching is performed at the end of the workout, you can get more growth out of the heavier work you performed prior to the stretch and you will also recover faster from your session.

If you use the proper load, you will reach full muscle fiber recruitment very early in the set, and this is amplified by the lack of oxygen (due to blood flow restriction). The body will naturally turn to the glycolytic fast twitch fibers when blood flow is restricted to a muscle, as these fibers do not require oxygen to do the job. As such, you will recruit the growth prone fast twitch fibers early in the set and you will also be able to fatigue them to a significant degree. Even though the fatigue was not imposed due to a dynamic exercise, it still represents a mechanical stimulus for growth.

Note that you reach this level of fatigue while using up a lot less glycogen, which means a lower cortisol response than with regular training, or a less significant increase in cortisol production over what you previously released during the workout.

Loaded stretching also has a very powerful impact on the sensitivity/responsiveness of the IGF-1 receptors. This basically means that not only does it increase IGF-1 release, but it also makes your receptors more sensitive to it!

It is a biochemical hypertrophy bomb!

45-60 seconds per set. If you can hold for longer than that, the load is insufficient for maximum growth

Isolation for the targeted muscle(s)

For maximum hypertrophy, we are shooting for a total time under loaded stretch of 2 to 3 minutes for a muscle. This means anywhere between 2 and 4 sets of 45-60 seconds

The goal is incomplete fatigue between sets. We want to still have some residual fatigue as well as some metabolites still present in the muscle when we initiate the next set. I recommend starting with a work to rest ratio of 2:1. So if your set lasted 60 seconds, rest for 30 before the next one.

Post-Fatigue: do your lifting set and on the last rep hold a loaded stretch for max time

This type of training is not only effective at building muscle but it is also a great tool to make you a better athlete, either by improving eccentric and isometric strength or by improving muscle recruitment.

In sports the eccentric and isometric strength actions are very important yet undertrained.

If you lack eccentric strength, your absorption phase (when changing direction or sprinting) is longer and a lot of the potential energy dissipates (strength leaks). This makes the switch from eccentric to concentric a lot slower and you lose a significant amount of power.

If your isometric strength is lacking, there is a delay between the end of the absorption phase and the switch to the concentric phase, once again making the switch slower and less efficient.

Loaded stretching increases rigidity during the eccentric and isometric actions as well as teaching the body not to rely exclusively on the stretch reflex to perform a change of direction. This makes the movement faster and more efficient. Even though it’s an isometric action (the slowest of all muscle actions), it actually has a significant impact on explosiveness.

Loaded stretching increases your capacity to recruit fast-twitch fibers. I know it sounds weird since we are talking about exercises devoid of movement (so much less speed), but it actually greatly helps explosive movements!

Another element of loaded stretching (or any other long-duration isometrics) is that you can focus on a specific muscle recruitment pattern. For example, you can hold the bottom position of a DB press by creating a co-contraction of the upper back and pressing muscles; the pressing muscles will be automatically turned on by the load but you can focus on firing the upper back. Since there is no movement to coordinate, it is much easier to focus on the muscle contraction, and because it will be maintained for a long time, the programming is fairly rapid.

30-45 seconds per set if the focus is on eccentric/isometric strength; 75-90 seconds for motor programing

Multi-joint exercises to focus on position and proper recruitment pattern

Of course, as a “stretching” method, it does work great to improve mobility. More importantly, it improves mobility while the muscles are contracted, which is what you need for most sports. This is very important both for performance improvement and for injury prevention. Here’s why:

1- STRENGTHENING THE MUSCLES IN THEIR ELONGATED STATE

The body will always look for the most economical way to do things. As such, it has learned to use the stretch reflex whenever a muscle has to produce force from an elongated state.  This is good, and we need that protective mechanism.  However, it also makes the muscles more prone to injuries because over time, the nervous system becomes less efficient at producing actual contractile force in a stretched position. So if you are playing sport and a muscle is suddenly and forcefully stretched, but your muscle is weak in the stretched position, the reflex alone will not hold you up and this increases the risk of tearing that muscle.

If you focus on keeping the target muscle tensed, loaded stretching programs your nervous system to become efficient at contracting a muscle when it is elongated. This has a positive effect on both performance and injury prevention.

Loaded stretching will increase tendon thickness and resiliency as well as create distal muscle hypertrophy, both of which make the muscle/tendons less likely to tear.

So, thickening the tendons will not only make you less prone to serious injuries but will also make you stronger and more explosive.

In sports, active (when the stretched muscle is tensed/contracted) and dynamic (when you are moving) mobility are key and they are not well correlated with passive stretching.

Loaded stretching increases elasticity of the muscles while they are being maximally contracted, which will translate to an increase in active and dynamic mobility.  This will then transfer to better technical execution of many skills, as well as an important reduction in the risk of injuries.  It also leads to a very rapid increase in ROM in many movement patterns.

Can be done at the beginning of a session to improve mobility on a lift on which you have limitations. Otherwise, it is best done on its own session or if time is an issue, at the end of a session.

Shoot for a total of 3 minutes under load and get there in as little total time as possible. So start with a load you can hold for about 90 sec at first.

Contrast sets: Contrast a set of loaded stretch (75-90 sec) with a set of lifting (e.g. split squat EQI/Back squat… push up EQI/bench press… 2-3 min between both, for 3 sets).

How to perform the exercises

Loaded stretching works with any exercise in which the target muscle reaches an elongated/stretched position at the end of the eccentric portion.

The concept is simple: slowly go down to the end of the eccentric portion of the movement (where the target muscle is stretched) and try to hold that position as long as tolerable. As you fatigue, your range of motion will increase because you can’t hold the position anymore (due to muscle fiber fatigue), but you still try to maintain the position… it then becomes a really slow eccentric. You stop the set when the burn is unbearable!

Give this method a try and it will spark significant gains as well as will improve the health of your muscles, tendons and joints.