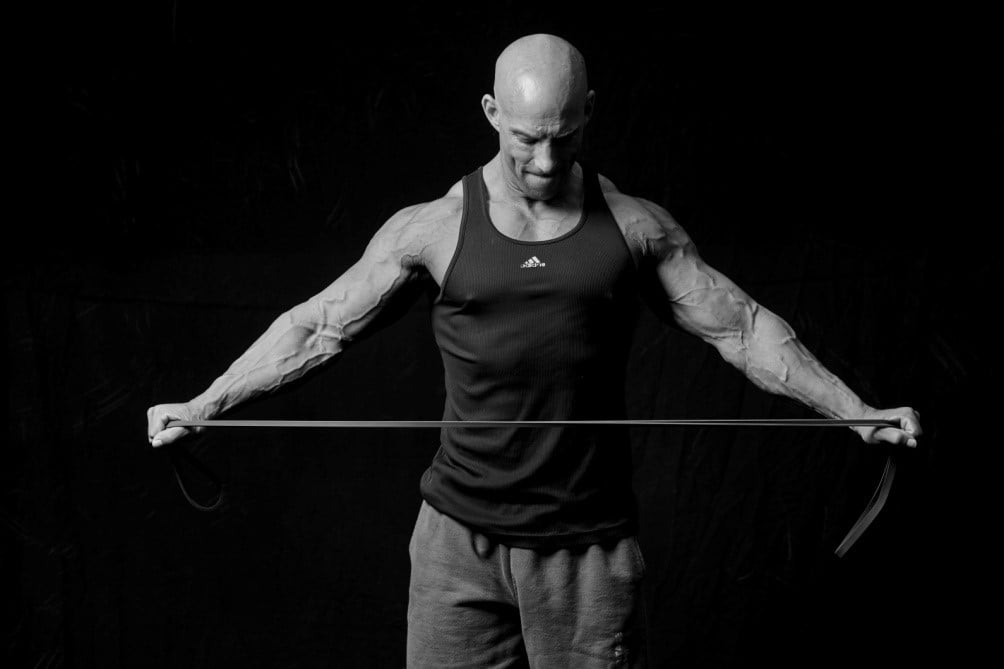 The Missing Key To Strength And Power

When it comes to building strength, everybody wants to talk about the best exercises, the most effective loading schemes and the coolest tools and training methods. We also often discuss muscle mass to increase the potential to produce more force and neural efficiency to be able to use your muscles to the fullest. But one thing we rarely talk about, and ironically it might very well be the most important element to develop superhuman strength, is tendon development.

When we talk about tendons, we can talk about the thickness/structural changes as well as rigidity/solidity. We can also mention the desensitisation of the Golgi Tendon organs. All of these can play a big impact on strength and power gains.

A thicker tendon is a stronger tendon. It can also store more potential energy during an eccentric action which can be used during a subsequent concentric (lifting) action. The thicker tendon also tends to have a power powerful stretch reflex, which can increase strength, power and agility.

On top of that, the thicker tendon is less likely to be torn. As a result, the body “feels” safer when the tendons are large. This will lead to Golgi Tendon Organs (GTO) that are less sensitive. The GTOs are the protective mechanism in your tendons. Their role is to prevent you from tearing yourself apart by producing more force than your structure can handle. When the GTOs sense that you are producing too much force for your own safety, it will inhibit force production.

The thing is that this safety mechanism is extremely conservative. An untrained individual can use about 30-40% of their muscles’ potential. Of course, the more heavy training you do, the more you “convince” the GTOs that it’s safe to lift heavyweight and they can become desensitized over time.

However, another way of desensitizing the GTOs is to make the tendons thicker. A thicker tendon is less likely to be torn and as such the body feels safe letting you lift heavier weights.

We should also consider that a thicker tendon is less likely to be injured which should allow you to avoid training interruptions that have a negative impact on your rate of progress.

To resume, tendon thickness plays a role in strength production by:

– Decreasing the sensitivity of the protective mechanisms of the tendons/muscles

– Reducing the risk of injuries

We know that thicker tendons lead to a more powerful stretch reflex, which will, of course, allow you to produce more power, but let’s examine more in-depth how it will affect speed and agility.

A thicker tendon will be able to absorb more force, essentially, it is a more effective shock absorber. When you are sprinting, every time your foot strikes the ground you are absorbing 4-6 times your body weight and the loading occurs in a fraction of a second. A thicker tendon will be a lot more effective at absorbing that force (instead of dissipating force by having a longer absorption phase). As a result, you are capable of more rapidly switching from absorption (foot hits the ground) to projection (foot pushes the ground away to produce movement). That shorter transition period will make you faster in itself, but since you are absorbing and storing more energy, you will also increase speed by having a stronger “push”.

And of course, the more powerful stretch reflex also increases push power which will make you faster by increasing how much force you apply to the ground.

I first read about super high reps to thicken the tendons in Science of Sports Training by Thomas Kurz, and then later in the work of Louie Simmons.

Kurz recommends sets of 50-100 reps (sometimes as high as 200 reps) to improve the tendons. I used it with athletes as early as 17 years ago, but mostly for injury prevention. I trained a pro football player who always pulled his hamstrings. I put him on a routine of 2 x 100 reps on band leg curls every day and he never had that problem ever again.

Tendons have very little vascularisation which might explain why mega high reps will help develop the tendons and potentially also speed up tendon recovery by increasing capitalization.

I kept on using this method with athletes in the early phases of their preparation to prevent injuries, but it’s only recently that I understood that it could help improve performance too. I made this realization when I began to work more with loaded stretching as a performance enhancer (https://thibarmy.com/loaded-stretching-one-powerful-versatile-training-method/), and reading Louie’s Special Strength Development for All Sports (https://www.westside-barbell.com/products/special-strength-development-for-all-sports) confirmed what I had suspected.

Myself I do these super high rep sets on:

I normally do these 2-3 times a week on my restorative training days (but with clients who only train 3-4 days a week I often will put one of these at the end of every workout).

These are low stress and can even be done daily. The way I do them is plan for a certain total number of reps and try to reach that number in as little time/fewer sets as possible.

Loaded stretching will increase tendon thickness and resiliency as well as create distal muscle hypertrophy, both of which make the muscle/tendons less likely to tear.

Loaded stretching refers to holding a position where the target muscle is under load/tension while being stretched.

For tendon strengthening, I like the sets to last around 60-75 seconds. If you can hold the weight for longer than that it’s too light. I also shoot for a total time under a load of roughly 3 minutes.

I like to use loaded stretching at the end of a workout, for a muscle or movement pattern that was trained that day. It will also contribute to muscle growth, it truly is an amazing method. For more on this, I suggest that you consult:

Another way of making tendons thicker is to use slow eccentrics.

Slow eccentrics have had a complicated evolution in the world of strength training over the years. At first, they were all the rage; my guess is that slower eccentrics have, anecdotally, led to more muscle growth in bodybuilding. They also lead to more muscle soreness which reinforces the belief that they lead to greater growth.

Then the pendulum swung back: research started to show that a fast eccentric might be just as effective for growth and more effective for strength. The reason is that even though the muscles are under less tension during the bulk of the eccentric phase, by going faster you create a greater stretch reflex when you reach the end of the eccentric phase, and you will also store more potential energy, both of which will contribute to a higher production of force. There is also the theory that this more forceful stretch/contract cycle could lead to more muscle damage, leading to more growth.

Even more recently, Louie Simmons went as far as to say that slow eccentrics can actually make you weaker (by decreasing potential energy storage in the tendons) and reduce your capacity to train by making you sore and extending the recovery period.

I think that the truth is somewhere in the middle. I think that in the earlier phases of training, slow eccentrics (4-6 seconds) will be beneficial to build the foundation/structure. But in an advanced strength athlete with a lot of muscle mass and thick tendons already, it is likely ineffective and maybe even detrimental.

NOTE: I believe that the neurotype 1B are those who will benefit the less from slow eccentrics because they need to emphasize the stretch reflex in training. It is also my belief that a lot of Westside guys are Type 1B because the Westside Conjugate System is literally the perfect way for them to train: those who become beasts from this type of training are likely Type 1B, and Type 1B are not built for slow eccentrics. So, it would make sense that if Louie tried slow eccentric overloads with his guys it would not work.

More info on the Type 1B profile:

As you see, including work to make your tendons thicker is an easy and non-stressful way of improving your potential to be strong. I’m always reminded of an old-time strongman from Quebec when I talk about tendon thickness: Victor Delamarre. He was a true phenom because he was the only 155lbs on 5’7″, yet he lifted 273lbs overhead with one arm and would climb a telegraph pole with a horse tied to his back! Anyway, when he died they found that his tendons were twice the size of a normal human being. I first heard that story when I was 18 from the strength coach who would become my first mentor. From that moment on I understood that tendons, not muscles, were the secret key to superhuman strength.

In the next article of this series, I will address the second portion of tendon development: the methods to use to desensitize the GTOs.