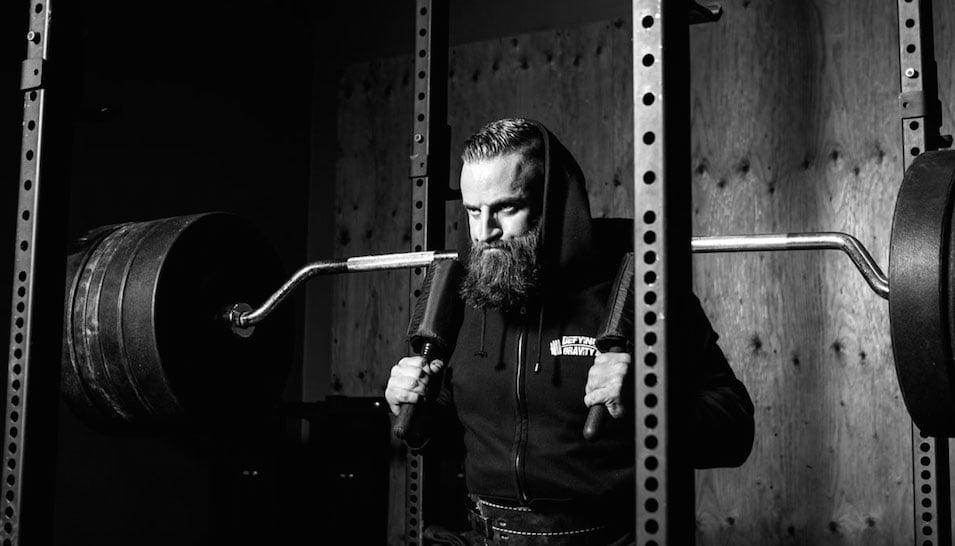 To Sniff Or Not To Sniff: Can You Get Too Amped Up Before A Big Lift?

Can you get too amped up before a big lift?  The screams, the 4-scoops of over-caffeinated pre-workouts, the ammonia caps or smelling salts, the slaps on the back/face, or the pulling of the ears prior to the last deadlift. There’s a good chance that you’ve once seen a great powerlifter use at least one of the above techniques to get amped up prior to an important lift. But is creating so much excitement before a lift good for everyone? Is it as effective as we might think? How much will your performance truly increase by doing this? As a powerlifter, will acting like a locked-up gorilla who’s about to be let out of its cage and wreak havoc on the platform truly instantly make me stronger?

On the other end of the spectrum of athleticism, let’s take a look at golfing, for example. Have you ever seen a pro golfer do the same thing right before his final million-dollar check shot? I’ve personally never seen it, but I would pay to see a caddy slap the shit out of a golfer’s back prior to hitting the ball. If it was the case I’m pretty sure I would actually watch golf.

Take 2 different athletes in both respective sports, a top powerlifter and a top golfer, who are both at the top 0.1% of their sport and whose next lift or swing might have a huge impact on the future of their career. Notice how they approach the moment in a totally different manner even if the result of their performance is just as important.

As a fellow self-proclaimed iron-loving meathead, I ask you this: Can you get too amped up before a big lift? Does a higher level of excitement always correlate to a bigger lift and better performance? 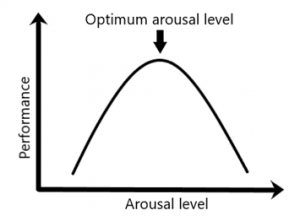 Indeed, studies have also shown that the more activated you are, the more tunnel vision you tend to have. Tunnel vision refers to a narrowness of viewpoint which can lead to important information being lost or ignored. Golfers may not always benefit from hitting their head into a tree to wake themselves up before a golf swing. They would become too activated for the task at hand and might miss important information such as the force of the winds, the distance from the hole, the inclination of the ground, etc. Things are different in the case of our gorilla-like powerlifter. The latter might need a higher arousal level considering the squat, bench press and deadlift are much simpler tasks to perform. Provided the athlete is proficient at those 3 lifts, they don’t require a huge intellectual implication. The powerlifter has fewer things to consider in his environment and can perhaps allow himself a little more tunnel vision. To make it simple, a more complex task that requires fine motor skills and a high intellectual demand usually needs less activation to get an OPTIMAL performance. A simpler task that requires gross motor skills and a lower level of intellectual demand usually needs more activation to get an OPTIMAL performance (Kahneman, 1973). Here are some examples of possible variations according to different sports. 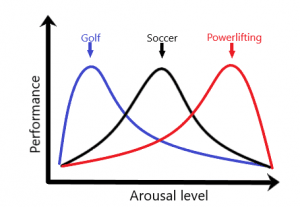 Notice on the figure above how the performance of a powerlifter can still go DOWN with an extremely high level of activation. That being said, your arousal level can be affected by 4 main components: motivation, workload, fatigue and stress. They all interact together and one always influences the other. For example, your workload on a daily basis can particularly affect your level of fatigue, which in turn often impacts your motivation. Moreover, while some stress can be beneficial to your motivation, too much stress can crush it. Together, these 4 components form what we call the context. For instance, stepping onto the platform for a record attempt will impact your arousal level much differently than doing a set at 70% in the gym.

Now, for the sake of keeping you interested, let’s transition into more practical situations. THE MILLION DOLLAR QUESTION: What is YOUR optimal arousal level?

Obviously, it depends on your personality type, your neurological profile, and what you’re training for, but let me give you some factors that can help you predict how amped up you should be before a big lift.

We have seen that the more complex the task is, the less activated you should be. Squatting is relatively simple, but only when you have MASTERED the technique. For beginner to intermediate lifters, getting too excited before a big lift might just ruin their technique. Advanced lifters are often more conditioned to the competition lifts, and their technique is more likely to be automatized. Now, just consider for a second the stress that comes with a first competition. There are so many external stressors that come into play when you’re a beginner, the stress of not bombing, respecting the rules, not knowing what comes next, what to eat, when to eat, when to warmup, different lifting equipment, knowing your rack heights, wanting to impress your loved ones, etc.

The search of excitement mixed with the lack of experience and guidance will often prompt the beginner athlete to try new things on meet day. The ammonia caps, the slap on the back, stretching the ears, pre-workout, hardcore metal music, etc.

That’s A LOT of things that can make you way too amped up. It’s normal for a beginner to be less conscious about his own reactions to high arousal levels considering the lack of experience, but with all the external stimulations stated above, he will often end-up over-activated and see a drop in performance.

Have you ever seen someone walking up to the platform super excited, killing a lift, but end up racking the bar before the referee’s command? That’s frustrating as hell. This seems to happen more with inexperienced athletes, but it’s also true with top athletes attempting world records. Sometimes, those errors are due to unfamiliarity with the rules, but many times, it’s only a matter of over-activation, leading to increased tunnel vision (as mentioned earlier).

Now, let’s talk a little about personality types. Some people are truly better than others at handling stress. They love pressure and the adrenaline rush. It’s their drive and they need that in order to perform better. For them, more activation often leads to best results in regard to lifting weights. However, aiming for the “enraged-gorilla-hype” zone for all your training sessions may lead to a decrease in performance in the long run. Failure to decrease mental intensity will have a negative impact. It will increase cortisol levels, affect your adrenals, and most definitely affect your strength gains and your ability to recover. You’ll eventually run out of gas and your adrenaline production will slow down.

On the other hand, there are also some people who just unfortunately suck at managing their stress. They tend to underperform when they’re exposed to pressure. Those are the same people who always do well in the gym, but then somehow mess up in competitions. Some will even start having sleep or hunger issues the week before a meet.

Some powerlifters DO need to calm down a bit before a big lift. Some elite powerlifters actually read during a World Championship between their attempts. Not because they don’t care, but just because they’re aware of their personality type and know how to deal with stress. They know how to act in order to perform at their best. You may be surprised by the soft-calming music some lifters put on their playlist and listen to before a PR.

I once coached someone like this who could not for the life of him control his nerves before AND during a meet. All he could focus on was the people he believed were counting on him to perform. He put a tremendous amount of pressure on himself to not let others down and he could not let go of this thought. The closer we got to the meet the more he would talk about the people who were looking up to him. Lifting heavy became such an intricate part of his identity that failing to do so was not an option. His sleep and his appetite were obviously affected going in the meet. Granted this was unhealthy on many counts and at the time he was doing it for all the wrong reasons, but he was counting on me to help him and so I did (we worked on those issues later).

The worse thing I could’ve done for him was to excite him more, try to hype him up, give him a slap on the back right before the lift. Instead, I had him sit in a corner by himself, I had him put his headphones on and listen to calming music (from a previously planned playlist), I told him to look down and to ONLY focus on his breathing and visualize his first squat attempt. We made sure to pick a very easy squat opener so he wouldn’t stress about it. Once you break the ice, things then tend to go smoothly. I stayed right next to him up until the “Bar is loaded” command. I spoke with a soft, calm but assertive voice telling him this was just another gym lift and reminding him that he could easily go for 5 reps with that weight, also reminding him all the technical cues & all the commands. He smoked the lift, walked off with a huge smile on his face and had a great meet.

As a coach, it is sometimes difficult to adapt to your athlete’s personality but you have to keep your ears and eyes open throughout their preparation and pay attention to what they say and how they react. They will give you cues as to which approach is best for them to get ready to step on the platform.

The goal, as mentioned earlier, is to get to YOUR optimal level of activation. If you’re the type of person who easily gets over-stressed before performing, or if it’s simply your first meet experience, you most probably to calm yourself down and relax. Talk to people, make some friends, you’ll see you’re not the only one dealing with nerves. Or go sit alone somewhere and work on breathing techniques, listen to music that actually calms your nerves down.

On the other hand, if you need excitement and thrive on adrenaline then make sure you feel the crowd, feel the energy in the room, turn on the inner gorilla, blast whatever bat-shit crazy music in your ears, take your pre-workout, sniff your training partner’s knee sleeves, get your coach or handler to slap your back before your heavy lifts and kill all the weights in sight.

Whatever personality type or neurological profile you are, make sure to find out exactly what kind of arousal zone you need to perform and do what it takes to get there.

► More is not always better;

► A SIMPLE task that requires GROSS motor skills and has a LOW level of intellectual demand needs MORE activation.

► BEGINNERS should often aim for a lower arousal state.

► Factors such as motivation, workload, fatigue and stress influence your arousal level.

► Even if you are not a beginner and can handle stress easily, you should not always train with the all-in, whatever-it-takes, let’s-grind-all-the-reps mindset.