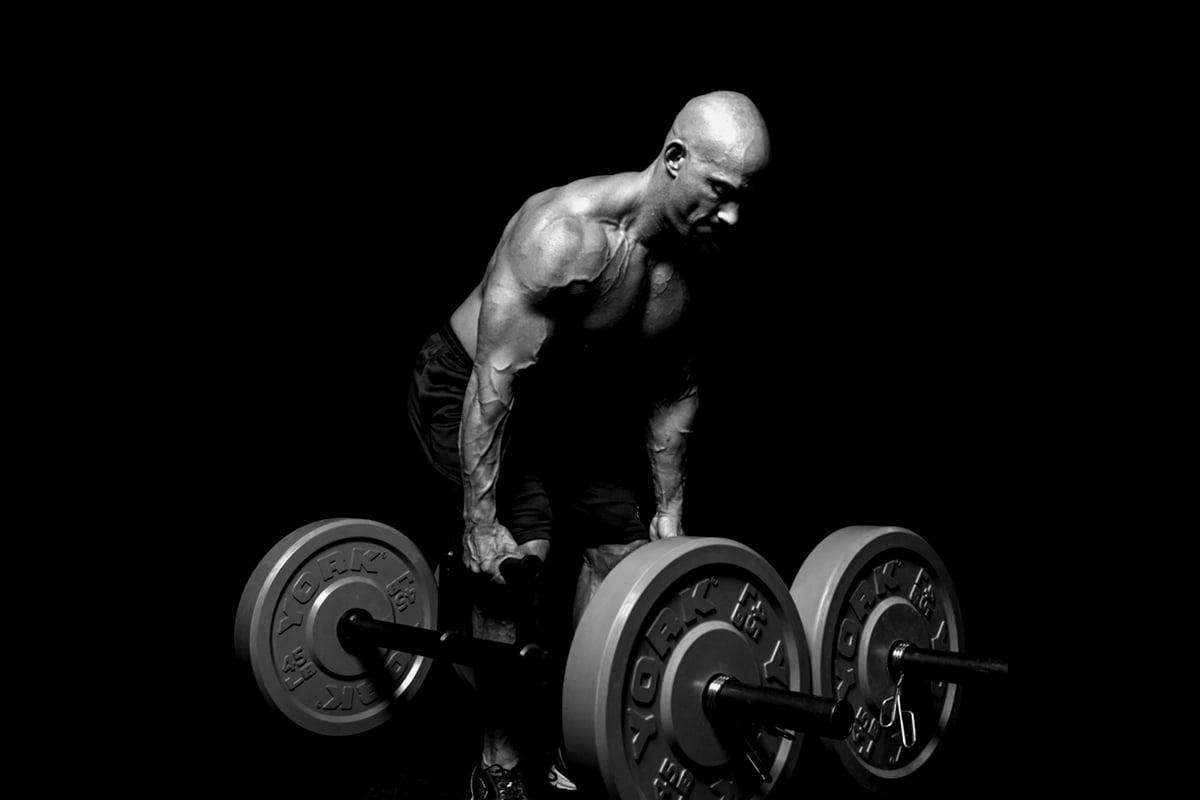 Sometimes Google has the best definitions:

I would add that, to me, jacked is more than just having lots of muscle. It’s about having that muscular look.

How is that different? Well, you can have lots of muscle, but if you have a 2” layer of fat you will not look “muscular”. Muscularity is a combination of muscle mass and leanness.

As for “power training”, this refers to any form of planned exercises that are explosive in nature.

Basically, anything done fast with the intent to be violent is power training.

True power training is about maximizing power production on all reps. As such, power exercises done for high reps, do not constitute pure power training.

For example, if you are doing a Crossfit WOD involving 21-15-9 box jumps, this is not power training. You will either give the minimum effort necessary to clear the box early on, so that you don’t waste energy. Or if you do go hard, you will quickly lose power output after 5 reps or so.

True power training is qualified by the intent to be as violently explosive as humanly possible on every single repetition. Each rep represents a maximum effort and that can’t be sustained for long. It’s not just about moving somewhat rapidly; it’s about being maximally violent on each effort.

This leads to the subject of this article: can power training contribute to giving you that “jacked” look? Most people think that it doesn’t. Which is why you rarely see this type of training being used in fat loss, body recomposition or hypertrophy plans. And I’m not gonna lie, most power exercises are not very effective at directly increasing muscle mass or shedding body fat.

But it doesn’t mean that they can’t have a profound effect on how your body looks.

What Power Training Will Do To Make You Look Jacked

While most power exercises are poor choices to maximize hypertrophy and fat loss (high pulls and even the Olympic lifts from the hang being possible exceptions) they still have an effect on how your body looks.

It can also help make other training methods more effective at building muscle in the long run.

Let’s look at how power training can make you look jacked.

1) It increases muscle tone. Granted, this will only make a visual difference if you are fairly lean to start with. But if you are, doing regular power training will make your muscles look harder even at rest. Why? Because muscle tone is nothing more than a partial state of muscle activation, to be ready in case you have to move fast. The more efficient your nervous system is, the harder your muscles will look even at rest. An increase in adrenaline or adrenaline sensitivity will also increase muscle tone.

3) Amps up the nervous system: Pierre Roy, former coach for the Canadian national weightlifting team, always had his athletes start their workouts with jumps. He did it because the way he taught the Olympic lifts was as a form of loaded jumping. He reasoned that the better you were at jumping, the better you’d be at lifting. In reality the main effect is that jumps (or any explosive movement done with the intent to be violent) increases nervous system excitation (it amps your nervous system up) which then improves your strength and power via better muscle fiber activation. By starting your workouts with jumps and throws (or other violent activities) you will improve your lifting performance which will help you stimulate more gains.

4) Can improve fast twitch fiber recruitment and firing rate over time. While power training has a direct, short-term, impact on fiber recruitment via the increase in excitation/activation of the nervous system, it will also improve your capacity to recruit fast-twitch fibers over time. This will not only contribute to making you stronger but also increase your muscle growth potential as fast-twitch fibers are more prone to hypertrophy. The more easily you can recruit them, the better you’ll be at stimulating their growth.

The benefits mentioned above will occur pretty much for certain when you include power training in your plan. By themselves they can contribute to giving you a better-looking physique while also improving performance, even as you are dieting down.

1) Sprints can improve oxidative capacities (making you more efficient at burning fat for fuel). He we are talking about sprints lasting around 30 seconds (regular sprints, bike sprints, hill sprints, prowler/sled sprints, battle rope, etc.). A study looked into using bouts of 30 seconds of all-out work on sprints (they used resisted bike sprints) with 4 minutes of rest. They found that the protocol improved max VO2, endurance at 80% (it doubled) and oxidative capacity. Improving oxidative capacity will make it easier to burn fat for fuel and will make you recover faster between sets. Recovering faster between sets increases training density without negatively affecting performance, which helps when developing muscle and getting lean (a high density/short rest is not optimal for hypertrophy if performance drops because of it).

3) High pulls and the power variations of the Olympic lifts from the hang can build muscle: Olympic lifting training is not a great hypertrophy stimulus, at least not when using the competitive lifts for 1-3 reps, as is commonly done in weightlifting training. The power variations and high pulls from the hang for sets of 4-6 reps however can build an appreciable amount of muscle, especially in the traps, upper and lower back and hamstrings. Olympic lifts/pulls from the hang provide a unique stimulus when you lower the bar back down. It’s a fairly violent shock absorption done by the traps. I’ve honestly never seen an exercise build traps like high pulls from the hang. And as someone with a traps fetish, I’ve tried pretty much every trap exercise and method known to man! This is an opinion shared by powerlifting coach Jason Blaha who went as far as to say that high pulls are the only way to get a natural lifter truly “yoked”.

4) Sprints can help maintain or even increase lower body muscle mass: Having worked with speed skaters and track cyclists I can attest that sprints, especially somewhat resisted sprints (resisted bike sprints, hill sprints, prowler/sled sprints) lasting 12-30 seconds can have a positive effect on lower body muscularity. In beginners, they might be sufficient to gain some muscle. In advanced trainees they are probably not a strong enough stimulus (unless you do the volume of an Olympian) to have you gain muscle, but they can help you maintain leg size. I’ve trained pro hockey players who would maintain their leg size without lifting during the season (but they would lose upper body size) from the skating they do. I personally like reducing heavy lower body work when I diet down and add more sprints and jumps. I never lose leg size, training is more fun and it keeps me fresher for my upper body lifting work. You don’t have to do this, but it’s nice to know that it’s an option. My friend Paul Carter is also heavily reliant on sprinting when dieting down to get super lean.

5) Sprinting can lead to more balanced lower body development: if your lower body training is focused mostly on the traditional leg exercises like squats, leg press, leg extension and leg curl, there is a good chance that some muscles will be underdeveloped. Coach (and my online client) Anthony Campbell is a beast who can Zercher squat close to 500lbs, but when he did a session of 400m sprints he got super sore in the glutes, hamstrings and adductors. Sprinting can “even out” muscle imbalances. It can directly increase muscular development and improve recruitment of those muscles so they will be better used during your lifting movements, increasing their development.

What Power Training Can’t Do

Outside of the exceptions mentioned earlier, power training is not a great tool to build a lot of muscle mass in the already advanced lifter.

I will argue that when you start using power training you can have a gain in muscle mass for the first 2 weeks that you do it, just because the novelty of the stimulus places a huge adaptative need on the body.

As such, if your goal is to improve the amount of muscle mass you carry, you will need to keep up lifting for size (or strength) to get there. You can’t rely on the power training that you do.

Also, while some forms of power training (sprints lasting around 20-40 seconds) will be effective for stimulating fat loss (the sprint 8 protocol being a great example), you should not use power training as a primary fat loss method. If you want to turn power training into fat loss training, you will have to move away from the “power building” nature of the exercises (you’ll essentially have to do Crossfit). This defeats the purpose of power exercises and carries a high injury risk.

I see power training as the finishing touch and as a catalyst. It makes everything else you do more effective and improves muscle tone and balance.

It also helps make training more fun and will help you maintain a high level of functionality even when you are dieting down. Which is a lot better than feeling and moving like a zombie, which is common with a lot of bodybuilding competitors when they diet down.

Never underestimate the value of liking the training you do, of having fun, of being excited. Especially when you are dieting down, as motivation tends to go out the window at the same time as cravings and deprivation move in!

If the only thing that power training did was to keep training fresh and you more motivated, it would still be worth it. But as we saw, it does a lot more than that.