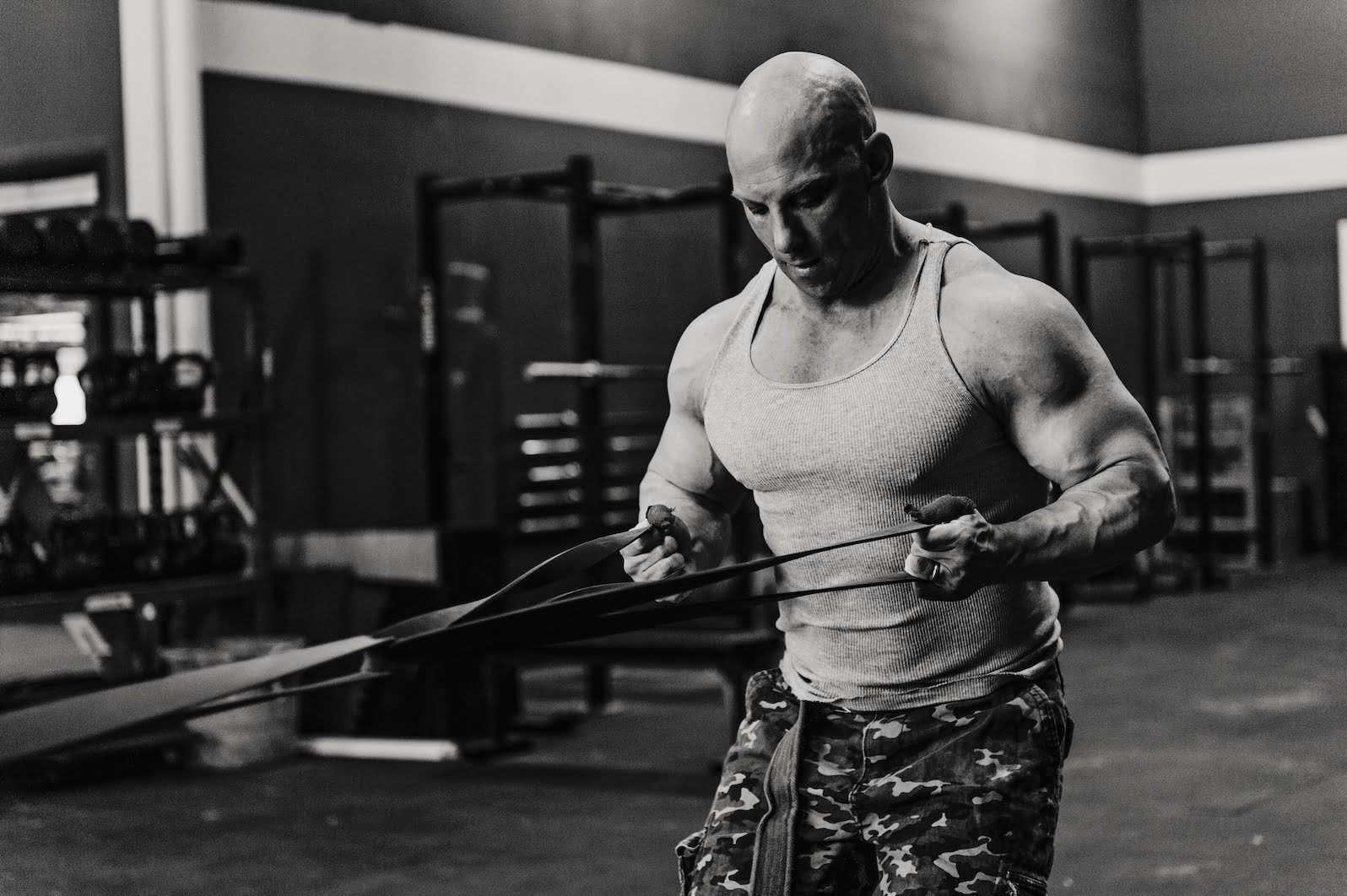 Leaning On The Shoulders Of Giants: Who To Look Up To If You Want Big Gains

I’ve seen it so many times that I came to accept it as the norm: You want big biceps, you pick up the most recent muscle magazine on the stands and lo and behold, there is an article detailing “Insert top bodybuilder’s name” shoulders and biceps program.  What a great timing!  Just what you’ve been looking for! You decide to hit that program for a month, only to be disappointed by the results.

Why? Maybe you looked up to the wrong person. Maybe the article was just an excuse to show hardcore gym pics on which they built a program. Maybe the bodybuilder in question is gifted when it comes to building biceps and everything will work on him. Or maybe he is genetic elite and you’re not. Or maybe he has years of experience and what works for him now but is not necessarily what worked for him when he was at your level.

This is not new. Young lads from the 80s also had the same thing happen to them. But nowadays it’s worse. Why? Because of the internet!

Everybody can log on and do a quick search for ‘shoulder and biceps program’ or ‘get huge shoulders and biceps’ and find more than a few dozen routines.

The thing is that it’s almost impossible to judge the quality of the information you may find on the net.  You may very well be stumbling on a golden program, but chances are that all you’ll ever find is fool’s gold!

Strength coaches are potentially a good source of information.  They are generally pretty good at making athletes strong, and getting stronger is one of the surest ways to get bigger. The problem is that the quality strength coaches are usually expensive and few can afford their services. Not to mention that most of them have no experience with bodybuilders and honestly don’t give a crap about building muscle without a performance facet to it. As a result, they know how to get someone bigger and stronger, but not necessarily how to deal with problems specific to bodybuilders, like symmetry issues for example.

Here are a few sources worthy of being investigated.

What I’m about to say is a generalization. It is not universally true, although more often than not, it is.

Compared to bodybuilders and elite athletes, powerlifters are pretty low on the genetic freak pool. By that I mean that the average powerlifter is rarely much above average when it comes to his muscle-building genetics.

Yes, like in all sports, some of them are just freaks of nature. But even at the elite level, powerlifters are much closer to being genetically average than bodybuilders. Heck, a lot of powerlifters started training for the same reasons as 90% of us: Either because they wanted to look like Arnold or because they wanted to become better at sports (more often than not, football).  Chances are that they turned to powerlifting because they didn’t have the genetics to be good bodybuilders or pro ball players.

However the things that top powerlifters have over most of the guys I’ve seen involved in the iron game are:

A true hardcore mentality. Among bodybuilders, saying that we’re hardcore is often a catch phrase. All good powerlifters live it! Trust me on this one, and it is not an attack on bodybuilders, powerlifters are a different breed! When I was in Ohio to watch Tate and his crew train, I was floored by the ‘take no prisoners’ attitude of his guys. I’ve trained Olympic athletes, pro football and hockey players and top level bodybuilders, and I have never seen that many crazy people training at the same time!

What a powerlifter lacks in genetics, he makes up in pure hard work and strength of will. Powerlifters have a more efficient nervous system because of their style of training. So when they perform bodybuilding-like training, their body responds much better than the average Joe.

An innovative mind. Where the average gym rats (and even bodybuilders) have more of a lemming mentality of following the leader (established dogma), the powerlifter always looks for new ways to correct weaknesses, grow stronger and get bigger. I’d venture as far as saying that most of the training innovations from the past decade came from powerlifters. And a lot of these discoveries are now used worldwide by pro athletes and even bodybuilders around the world.

The average gym rat and bodybuilder is often afraid of trying some weird new stuff that goes against popular beliefs.  It may be that he doesn’t want to look foolish. The powerlifter doesn’t care. If it works it works, even if you look dumb doing it.

I think that this has a lot to do with training environment. The powerlifter generally trains either in his garage or in a powerlifting gym, where blending in, isn’t required (or even well regarded). On the other hand, the bodybuilder who trains in a commercial gym doesn’t want to look like a weirdo and will tend to go with the flow (even if it’s subconsciously).  Obviously, not all bodybuilders are like that. But look at where the most hardcore bodybuilders train: Dorian Yates had Temple Gym and trained when the gym was empty. Ronnie Coleman, Branch Warren and Johnny Jackson train/trained at MetroFlex which is almost exclusively catering to bodybuilders and powerlifters (so not really a commercial gym). On the East Coast, the top guys are training in Syosset NJ, at Bev Francis’ gym, widely known as one of the most hardcore gyms in the world.

The bottom line is that the first group of people you should look up to for training information that works is the powerlifters.

Some good stuff to pick up from them:

I’ll be honest. Although I love bodybuilding, and building the biggest muscles possible is a passion of mine, there is not a single group of lifters that I look up to more than powerlifters.

These mastodons are pretty much the same breed as powerlifters when it comes to training mentality, although they tend to be more of the show-off type!  That’s not a jab at them; giving a good show is actually part of their sport.

Everything I said about powerlifters also applies to strongman competitors. One thing that they have that others don’t is the need to practice their events, making their training much harder to regulate than a typical powerlifting/bodybuilding program.

For that reason strongman competitors are masters at managing fatigue and improving recovery.

And this is not something new. Even strongmen of old (the late 1800s and early 1900s) knew the importance of managing fatigue.  George Hackenshmidt wrote:

“Do not perform any exercise to excess, so as to tire yourself out. If you feel tired and exhausted, give yourself the necessary rest, and, as in everything else, use moderation and common sense.”

This is how I always say that a session should end. Once the acute fatigue from the effort subsides, around 60 minutes after your session, you should not only be fresh, but motivated to train again!

Some cool stuff to take away from strongman competitors are:

I’m not dismissing the importance of isolation exercises.  If you know me and my work, you know that I feel that one cannot build a complete physique without the use of isolation work. But from an overall size-building aspect, the big basics are your best friends.

It may seem like I’m forgetting bodybuilders.  I’m not!  I consider that the old-school guys have much more to teach us regarding building muscle. Why? Genetic pool!  Back in the 40s up to the 70s bodybuilding, heck, weight training, was an underground activity. Few people actually trained with weights. Nowadays we have millions of guys and gals all over the world training regularly.

The more people training, the greater the chance of finding that one genetic freak that just blows up and becomes a good bodybuilder. So back in the old days, I believe that fewer genetic phenoms were involved in bodybuilding. In fact, there were probably more average/below average guys than blessed ones. This is because a lot of the guys who picked up weight lifting (which was somewhat frowned upon at that time) were those who were smaller and wanted to level things out.

So the old-school bodybuilders had to work extra hard to find ways of adding muscle. Not to mention that fewer (if any) anabolic drugs were available back then. I’m not saying that they were not being used, just that fewer guys used them and at lower doses. Not to mention that some substances were not used (insulin, IGF-1, clenbuterol, DNP, etc.) or rarely (hGH).

Plus, back then, the camaraderie between lifters was much like it is among powerlifters nowadays. Guys were actually trying to help each other out. A more positive environment always leads to more innovation and better progress.

Here is some stuff that I personally like about the old-school guys:

There are some modern-day bodybuilders that are worth listening to. They are not necessarily those at the top, but rather those who improved the most despite average genetics. Innovative guys are pretty easy to spot.  Most of the time, they are the most eager to share their knowledge because they recognize themselves in the underweight newbie desperately looking to add muscle to his frame.

Powerlifters, strongmen, bodybuilders: all the same

When it all boils down to it, everybody who is into building serious strength or muscle is part of the same breed. Muscle is muscle. YES the CNS plays a role in strength, but if a muscle gets stronger it will also get bigger, period.  And if a muscle is bigger, its strength potential is greater.

IMHO, you can call yourself a bodybuilder, a powerlifter or whatever you like, the training shouldn’t be that different. Bodybuilders can learn a lot from powerlifters and vice versa.  Now, go do your research!