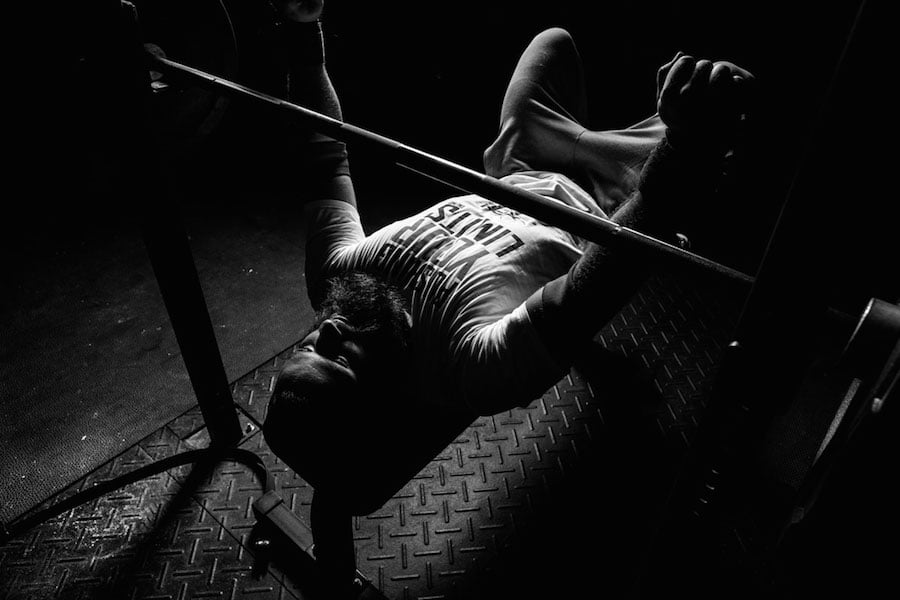 There will be little debate around the popularity of the bench press. For reasons right or wrong, having a big bench press has become a rite of passage into the clan of the hardcore lifters and alpha males. As such, the bench press occupies a main role in most people’s training programs.

Since getting a big bench is so important in the modern iron jungle, lots of effort, sweat and (sadly) pain are put into bench press training.

If you have been trying to increase your bench, chances are that you have suffered from some form of shoulder discomfort, pain or even full blown injury. It might even have reached a point where the pain prevents you from training as hard as you would like to.

Shoulder pain and dysfunction resulting from the bench press is common and can be frustrating. It can have a strong negative impact on your performance via neural, psychological and/or physiological inhibition.

The three most common causes of shoulder dysfunction in the bench press are:

As you can see, the common theme here is “bad technique”.

When it comes to shoulder problems, I find that the main technical issue is an inability to keep the shoulders in their socket when bench pressing.

The shoulders should be back and down when bench pressing, otherwise they are compromised and the risk of overuse or acute injury drastically increases.

If you observe most people doing their bench press, you will see that their shoulders might start down and back, but when they start to move forward (toward the ceiling) or up (toward your ears) as soon as they initiate the pressing movement, putting the stress mostly on the shoulders. If the shoulders move forward, it is indicative that the rear delts/rhomboids aren’t firing properly. If the shoulders move up, it means that the engagement of the lats is not being maintained.  This not only makes the bench press more hazardous, but decreases the exercise’s muscle-building capacity.

Lifters who can get their shoulders down and back in the setup and during the lowering portion, but lose this position when they initiate the pressing phase are demonstrating this inability to keep the lats and mid-back/rear delts engaged.

I use three different drills to reinforce keeping the shoulders down and back by increasing the involvement of the lats and mid-back/rear delts:

This drill is great to program the use of the lats in the bench press and help you learn to keep them engaged throughout the entire range of motion.

This exercise can be used as a motor-learning movement (to be done with light weights, several days a week), as an activation tool (to get those lats firing before your work sets) or as an actual training exercise:

As a motor-learning movement: Use only a small amount of tension sufficient to allow you to feel your lats engaging. Do plenty of sets (4-6+) of moderate reps (4-6) with a light to moderate barbell weight.

As an activation tool: Use a moderate amount of band tension for your 3-4 gradually heavier warm-up sets.

This exercise was taught to me by my good friend and national level powerlifting coach Alex Babin. Its purpose is to increase the activation of the rear deltoids when bench pressing and to increase the mind-muscle connection with these muscles. The bands increase the awareness of your rear delts, facilitating their use during the movement.

If your rear delts are not firing optimally when you start to press the barbell, your shoulders will move toward the ceiling, putting them in a compromising position.

Ideally you will use an Elitefts Pro Short Monster Mini Resistance band or a Theraband band loop to do this drill. Loop the band around your wrists and set up to bench press.

Just like with the sweeping bench press, the bench pull-apart can be used either as a motor-learning movement, an activation tool prior to your work sets, or a training exercise.

As a motor-learning movement: Perform 4-6 sets of 4-6 reps using a fairly slow movement to better focus on keeping tension on the rear delts.

As an activation tool: Do your warm-up sets with the band around your wrists then take them off during your work sets.

As a training exercise: Do your regular heavy sets with the band.

The Bowtie is an invention of powerlifting legend Donnie Thompson. It’s a simple but innovative tool. You wear it across your shoulders pretty much like you would wear a back pack and it pulls your shoulders back. It’s great for postural improvements but also to teach you to bench press with the proper position.

I love bench pressing with the Bowtie. For years, I was a shoulder-dominant bench presser. This worked fine for a while because my shoulders were super strong.  Over the years though, it took its toll and I had to relearn to bench press while keeping the shoulders down and back. Since this is not natural for me, I still have a tendency to lift my shoulders up when going heavier or when I get fatigued. The Bowtie keeps my shoulders back, reinforcing the proper movement pattern.

The Bowtie has made a significant difference in making my pectorals grow since they are now the prime mover instead of the deltoids. The Bowtie strap also acts like a soft tissue/ART release, as it is being pressed against the front delt while you are bench pressing. I simply love it!

Now, I personally use the Bowtie on all my bench press sets. I also use it during incline presses. I will keep wearing it on all my sets for a long time because I really want to engrain the new pattern in my nervous system. The second phase will be to use it for about half my sets. I will keep using it for my heavier sets since that’s where a breakdown in form is most likely, and use the lighter sets as skill practice without it. Finally, in my third phase, I will stop using it altogether by which time my new technique should be automatized.

Even if you have no shoulder issues the Bowtie is a cool tool to use if you want to focus on the pecs more when training the bench press.

Trust me, there is nothing worse than not being able to do something that you once could do fairly easily. I used to routinely bench press 405lbs and hit a max of 445lbs at Dave Tate’s compound, but I did it while putting too much stress on my shoulders.  The end result is that for the past 5 years, I could rarely bench without debilitating pain, which led to muscle inhibition that made 300 feel like 405.  Thanks to the three tools mentioned above and the help of my good friend Alex Babin, I’m now back on track to bench pressing heavy.  Hopefully, these tools will solve shoulder issues that are limiting your bench press performance or help you avoid these problems altogether.